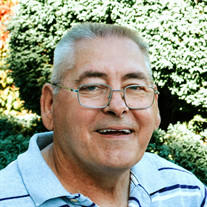 Willam Lee Williams Jr., a South Bend resident, died Saturday, September 7, 2019 at the Capital Medical Center in Olympia; he was 74. He was born June 5, 1945 to William Lee Sr. and Creasy (Stigall) Williams in Newberry, Michigan. William worked at Pacific Hardwoods and Weyerhaeuser before attending college. He graduated college with an associates degree as a corrections officer. He was hired and worked in one of the first groups ever hired at the Stafford Creek Correctional Center. Some of his hobbies include hunting, fishing, camping, and bowling. His grandchildren and his wife were his life. His wife Rosita survives him at the family home in South Bend. Also surviving him are two daughters; Teresa Rucker (Mike Gleason) of South Bend and Tina (Dave) Chapman of Raymond, one son; Daniel (Marcy) Williams of South Bend, his sister Linda (Cecil) Gunter of South Bend, five brothers; Dale (Connie), Clarence (Toni), David (Terri Karnas), Delmar (Susie), and Larry (Jerry) Williams, all of South Bend. Also surviving him are 10 grandchildren, and 8 great grandchildren. Preceding him in death are his parents, two grandchildren, his sister Polly Davis, and his brother Jessie Joe Williams. A celebration of life will be held in William’s honor on Saturday, September 14, 2019 at the Willapa Harbor Chamber of Commerce in South Bend at 2:00 p.m.

The family of William Lee Williams Jr. created this Life Tributes page to make it easy to share your memories.