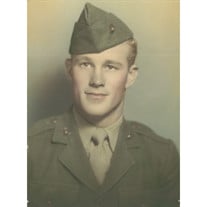 Wayne Galveston Patrick, died peacefully while at home in his sleep on Wednesday, May 2, 2018 at the age of 93. He was born September 13, 1924 to Ernest Ester and Opal Leota Lozier Patrick in Oilton, Oklahoma. He was the third of four children, and is survived by his youngest sister, Ollie Douglas. Wayne graduated from Sinton High School in Sinton, Texas with the Class of 1942, and joined the United States Marine Corp during World War II in 1943. After boot camp in San Diego he was matched up to be sent to the aviation department in San Diego. However, when they saw that he played the bass fiddle and the tuba in the high school band, they were eager to hear him play, and after a lengthy audition, he began his service in the United States Marine Corp Concert and Marching Band. He met South Bend resident, Irene Johnsen, while they were both serving in the Marine Corps. They married on December 22, 1945, and for the next 67 years, they were blessed with three sons, John Patrick (Linda) of Moses Lake; Darrell Patrick (Maria) of Bay Center; and David Patrick (2013); 12 grandchildren; 21 great grandchildren; and three great, great grandchildren; as well as many lifelong friends who were thought of like family. Wayne will always be remembered as a friend to everyone, and proudly worked as a lineman for the Public Utility District No. 2 in Raymond, Washington, from August 1953 until his retirement on December 31, 1982. The family would like to give a special thanks to his past and present caregivers who will never be forgotten for their tireless support, love, and care. Wayne was a long-time member of the First Lutheran Church in South Bend, Washington. Memorial donations may be made in his name to the First Lutheran Church Endowment Fund, PO Box 598, South Bend, Washington 98586. A potluck Celebration of Life will be held at 11:30 a.m. Sunday, May 27, 2018 at South Bend First Lutheran Church, 103 Adams Street, South Bend, Washington 98586. Arrangements are in care of Stollerâ€™s Mortuary of Raymond, Washington.

Wayne Galveston Patrick, died peacefully while at home in his sleep on Wednesday, May 2, 2018 at the age of 93. He was born September 13, 1924 to Ernest Ester and Opal Leota Lozier Patrick in Oilton, Oklahoma. He was the third of four children,... View Obituary & Service Information

The family of Wayne Patrick created this Life Tributes page to make it easy to share your memories.

Wayne Galveston Patrick, died peacefully while at home in his...

Send flowers to the Patrick family.