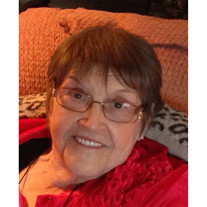 Wanda Lou Johnson, age 83, a longtime resident of Raymond, Washington, passed away peacefully at the Willapa Harbor Health Rehabilitation Center into the arms of her savior on August 29, 2017. She will be forever missed by her family and friends. Wanda was born on July 28, 1934 in Springfield, Missouri to Cash and Bertha (Evans) Duckworth. As a child Wandaâ€™s family moved from Missouri to California. In 1947 Wanda met the love of her life Earnest C. Johnson. They began dating and were soon married on August 10, 1948 in Yuma, Arizona, making their home in Corona, California. In 1967 while visiting relatives in Raymond, Ernie and Wanda fell in love with the area and soon relocated to Washington State. Earnest preceded her in death on September 18, 2016. They were married for 68 years. Wanda was a long time member of Community Chapel in South Bend, WA. She taught Sunday school and was actively involved in the churchâ€™s music program. Wanda also directed the Junior Choir and played piano for Sunday services for over 30 years. She loved to play the piano and sing songs of praise to the LORD. Some of the solos she sang, she wrote herself. A homemaker at heart, Wanda enjoyed cooking, knitting, and canning. Her other passions included reading, playing board games, and most of all, spending time with her family. Wanda is survived by two sons, James (Barbara) Johnson of Raymond and Randall (Deborah) Johnson of Bothell; two brothers, Jerry Duckworth and Thomas (Carolyn) Duckworth both of Raymond; one sister, Linda Sue Tidwell of South Bend; four grandchildren, Danny Johnson, Stephen (Christina) Johnson, David (Taryn) Johnson and Krystal (Jeffrey) Daw; one honorary grandson, Jeffrey (Jill) Wampler; eight great grandchildren, Dustin (Sarah C.), Brandon, Hannah, Sarah Michelle, Noah, Caleb, Katelyn and Colin; one great great grandson, Eli; several nieces and nephews as well as a very special friend, Bessie Hubbard, and caregivers Bonnie Balani and Ruthie Rubey. Wanda was preceded in death by her parents; two sisters-in-law, Carol Duckworth and Judy Duckworth and a nephew Jonathon Tidwell. Graveside services will be held at 11:00 a.m. Saturday, September 9, 2017 at the Fern Hill Cemetery in Menlo. A celebration of Wandaâ€™s life and her love for music will follow at New Life Fellowship in Raymond. Arrangements are in the care of Stollerâ€™s Mortuary in Raymond.

Wanda Lou Johnson, age 83, a longtime resident of Raymond, Washington, passed away peacefully at the Willapa Harbor Health Rehabilitation Center into the arms of her savior on August 29, 2017. She will be forever missed by her family and friends. Wanda... View Obituary & Service Information

The family of Wanda Johnson created this Life Tributes page to make it easy to share your memories.