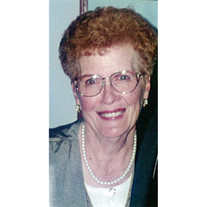 Verna Kuttel, a lifetime Willapa Harbor resident passed away Jan. 27, 2015 at the Willapa Harbor Care Center in Raymond. She was 96 years old. Verna was born Sept. 3, 1918 in South bend, WA to Worthy and Ethel (Anderson) Edwards. The family moved to Raymond and opened Edwards Flower Gardens & Nursery. She graduated from Raymond High School on Feb. 5, 1938 married her local milkman, Emil Kuttel. Verna became a farmerâ€™s wife, learning to milk, operate a two man bailer, cook for hired hands and canned everything that stood still long enough. Verna spent 30 years working as a nurseâ€™s aide at the Riverview and Willapa Harbor Hospital. She worked nights and was well known for her expertise in the delivery room and nursery. She helped deliver 5 of her grandchildren. She was an outstanding baker and locally famous for her Christmas and Easter cookie and candy platters. Verna was also a Master Gardener before there was such a thing. She would plant anywhere she could find dirt. Her gardens and flower beds were beautiful things. Verna was preceded in death by her husband Emil, brothers Bill, Bob, Richard, Malcolm, Ed and sister Jan Edwards. She is survived by a son Mike (Debbie) Kuttel, daughters Ann Franks and Cheryl (Wyman) Fields, grandchildren Gerald, Jeff (Dusty) Franks, Michael (Donna) Franks, Sherry Franks, Kelly Fields, Andrew (Stephanie) and Mike (Arin) Kuttel as well as 7 great grandchildren. Verna was a remarkable woman who loved her home and family. We will miss her gardens, flowers, cooking for hay crews, her cookies and her beautiful blue eyes. Memorial donations may be made to HAVA at PO Box 243 Raymond, WA 98577. Memorial services will be held at 11:00 a.m. Saturday, January 31, 2015 at the South Bend Baptist Church. Arrangements were in care of Stollerâ€™s Mortuary in Raymond.

The family of Verna Kuttel created this Life Tributes page to make it easy to share your memories.

Send flowers to the Kuttel family.