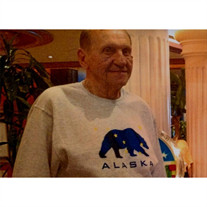 Thomas Robert Deufel a Raymond resident, died Friday, April 15, 2016 at the Willapa Harbor Health and Rehab Center in Raymond, he was 78. Tom was born September 21, 1937 in Chicago, Illinois to William and Vivian (Glickley) Deufel. He attended school in Chicago until 9th grade. Tom married Donna June 9, 1956 in Tacoma, she preceded him in death. He joined the United States Army and served from October 1954 until his honorable discharge in 1957. Tom worked for O.D.M. Machine Works out of Chicago. He also owned and operated the Valley Tavern and Donnaâ€™s Deli. Tom was a member of the American Legion in Raymond Post #150. He enjoyed playing soft ball and ping pong in his younger years; fishing, going to casinos, bowling and traveling were a few of his favorites as well. He loved to watch the Seattle Seahawks and enjoyed going to High School Basketball games. He is survived by sons Mike (Teresa) Deufel of Raymond, Tom Deufel, Jr. and Rita Merrel also of Raymond and a step son Norman Herner of Olympia; daughter Sharon Hastings of Spring Field, OR and step daughter Rhonda Horner of Oregon. Tom is also survived by a brother Bill Deufel and a sister Mary Dolgner both of Chicago, IL, 6 grandchildren Sara, Alan, Lily, Donna Joy, Hayden Deufel and Guy Hastings, one great grandchild Zabulon and three step great grandchildren, Ru-Ru, Wyatt and Branden. He was preceded in death by his wife Donna, brother Keith Deufel and his longtime girlfriend Penny Nichols. Memorial donations may be made to the Raymond Fire Department at 212 Commercial Street, Raymond, WA 98577. Memorial services will be held at 2:00 p.m. Saturday, April 30, 2016 at the Crossroads Church in Raymond. A gathering will be held following at the American Legion in Raymond.

Thomas Robert Deufel a Raymond resident, died Friday, April 15, 2016 at the Willapa Harbor Health and Rehab Center in Raymond, he was 78. Tom was born September 21, 1937 in Chicago, Illinois to William and Vivian (Glickley) Deufel. He attended... View Obituary & Service Information

The family of Thomas Deufel created this Life Tributes page to make it easy to share your memories.

Send flowers to the Deufel family.