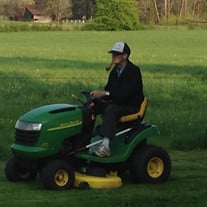 Theodore Albert VanTuyl passed away Tuesday evening, July 7, 2015, in Centralia, leaving peacefully to join his wife of over 60 years. Ted spent most of his life on Willapa Bay. He was born in Raymond on Dec. 9, 1924, graduated from Raymond High School and enlisted in the U.S. Navy in 1943. He served three years and nine months in the Navy in World War II spending time in the Pacific theater, aboard the U.S.S. Cleveland as a Motor Machinist Mate First Class. After his discharge he returned to Raymond, bought a small piece of land on Willapa Bay, and eventually converted a small float house into a comfortable home. He met and then married Margaret Sharp on June 2, 1951. Ted and Margaret raised a family in Bruceport, with Ted working as a heavy equipment mechanic. He loved fishing with the family, retiring in 1979 and spending the rest of his life with Margaret salmon fishing, sailing and touring the Western states in their Airstream motor home. He was a member of the Chinook Indian Nation and kept a quiet pride in his military service. He loved his woodworking shop, where he practiced carpentry and built furniture that still adorns the homes of most of his family members. Just a few yards outside of his shop, he supplied a family of raccoons with food every day, finding comfort in the animals peeking over a short rock wall at their meals. He was a voracious reader, in print and, later in life, by books on tape. He spent his summers, up until his last, splitting logs and creating a supply of perfectly-split firewood that moved with him from his home in Bruceport to his last residence on his son Steveâ€™s homestead in Adna. Ted is survived by sons Ted (Joyce) VanTuyl and Steve (Carmen) VanTuyl, daughter Linda Jorgensen, six grandchildren and four great-grandchildren. In lieu of flowers, memorials may be made to the Washington Talking Book and Braille Library in Seattle. A graveside service will be held at 1 p.m. on Monday, July 13, 2015 at the Fern Hill Cemetery in Menlo. Arrangements were in care of Stollerâ€™s Mortuary in Raymond.

Theodore Albert VanTuyl passed away Tuesday evening, July 7, 2015, in Centralia, leaving peacefully to join his wife of over 60 years. Ted spent most of his life on Willapa Bay. He was born in Raymond on Dec. 9, 1924, graduated from Raymond... View Obituary & Service Information

The family of Theodore VanTuyl created this Life Tributes page to make it easy to share your memories.

Send flowers to the VanTuyl family.