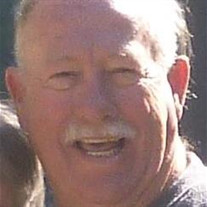 Terrence Lee Hardy, known as Terry, a long time Raymond resident died Saturday, February 8, 2020 at St. Peters Hospital in Olympia; surrounded by his loving family. He was 73.  He was born October 10, 1946 to James Joseph Jr. and Ruth Cedelia (Cook) Hardy in Norfolk, Virginia.   After attending school in Ocosta, Terry worked at the Weyerhaeuser mill in Raymond from 4/4/1968 for 43 years until he retired on 4/4/2011.  On July 10, 1999 Terry married Jewel, and they remained married until his passing.   Terry was a member of Goldwing Road Riders Association, The Willapa Harbor Gun Club, and was a volunteer reserve police officer for South Bend for over 20 years.  Some of his hobbies were hunting, motorcycle trips, camping, and fishing.   Terry is preceded in death by his 5 brothers.  Surviving him are sons Jim (Melanie) Hardy, and Jerry Wilson, Daughters Teresa (Carl) Ariss, Gina Wilson, and Sheila Wilson Peters.  He is also survived by grandchildren Mandy, Ronie, James, William, Timothy, Bailey, and by great grandchildren Savanna, Brandon, Brylee, Talyn, and Renley. In lieu of flowers memorials may be made to Helping Hands at P.O. Box 597, South Bend, WA 98586.  A celebration of life will be held at the Elks Club in Raymond on March 7 at 1:00 pm.

The family of Terrence L Hardy created this Life Tributes page to make it easy to share your memories.

Send flowers to the Hardy family.