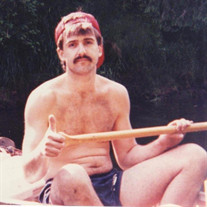 “I can do all things through Christ who strengthens me.” Philippians 4:13 Steven Allen Clements gained his angel wings on October 19th, 2021 after a 10 month courageous battle with cancer. Steven was born on November 12th, 1962 to Marvin Leroy Clements Sr. & Pat (Sowers) Cole. Steven was 58 years young. Steven enjoyed all-things athletics and graduated from Raymond High School in 1981 beside some of his closest friends- Jeff & Laura Lundy, Mark Hatfield, Joey Maneman, and Jerry Swanson. Steven enjoyed his childhood growing up on the hill in South Bend and on Smith Creek where he enjoyed many adventures with the Hatfield & Weisel families. After graduating, Steven attended Clover Park Technical College where he truly enjoyed his studies in Broadcasting. Steven worked at KAPA radio station where he was truly in his element. Steven’s favorite pieces to cover were of course.. sports and he loved classic rock music. Steven’s baby sister, Sonja, recalls Steven often commentating & announcing in his best broadcaster voice absolutely everything, from announcing the dogs going outside, to commentating the sports games while watching them at home. Steven even had the honor of writing the sports column for the Daily World newspaper. Steven later became a Dad to Payton Elizabeth Clements & Cameron Woodrow Clements. Steven’s kids were his world. Steven enjoyed watching Payton cheer for the Raymond Seagulls as well as run for Pacific County Fair Queen. Steven also enjoyed watching Cameron play the drums for the RHS Pep Band. Steven later would marry his “Tea,” Teresa Minks-Clements, who cared for him day and night during his fight with cancer. Steven loved taking drives through the country with Teresa and their dog Ellie Elizabeth. Steven held many careers throughout his life including Grays Harbor PUD, Pacific Hardwoods, Denny’s Lumber, and lastly Weyerhaeuser, where he worked for many years up until his passing. Steven was known for being a proud Pittsburgh Steelers fan and he was very proud of his bright yellow Chevrolet truck. It was no secret how much Steven loved the Huskies and he was so proud of his daughter Payton when he got to see her graduate from UW in 2017. Steven loved when the Huskies would play the Ducks so he could banter with his life-long friend, Paul Staats, on who was going to win. Steven taught us all to be unapologetically ourselves & to always literally dance like nobody is watching. Steven took pride in being uniquely himself and he had no interest in conforming or blending in with the crowd. Steven loved having fun and he made sure those around him did as well. Steven is preceded in death by his Father, Marvin Leroy Clements Sr. & his Aunt Gayla Dixon. Steven is survived by his children, Payton Clements & Cameron Clements, his wife Teresa Minks-Clements, his Mother Pat Cole, his Step-Mother Millie Clements, his brother Marv (Moose) Clements Jr., his sister Karen Clements, his sister Sonja Clements-Ping, his step-children Sheila, Barry, Ryan, Lyza, & Ty, his Aunt Carol Clements-Newbom, his cousins Kevin & Todd Dixon, his bonus sisters Paula, Susie (Webber) and Amy (Betrozoff) Weisel, nieces & nephews Matt, Dallas, Tucker, & Hunter Clements and Alex Ping, & his close friends, Jeff & Laura Lundy, as well as Rance & Tanya Newman, who all spent many days with, or supporting Steven during his fight. The family would like to thank Harbor Home Health & Hospice for their support & time, specifically Sarah Schimelpfenig, RN for being there with family, as well as Harley with Stollers Mortuary for his kindness while we grieve. A Celebration of Life will be held in Spring 2022. “A lighthouse doesn’t save the ships; it doesn’t go out and rescue them, it’s just this pillar that helps to guide people home.”

&#8220;I can do all things through Christ who strengthens me.&#8221; Philippians 4:13 Steven Allen Clements gained his angel wings on October 19th, 2021 after a 10 month courageous battle with cancer. Steven was born on November 12th, 1962 to... View Obituary & Service Information

The family of Steven Allen Clements created this Life Tributes page to make it easy to share your memories.

“I can do all things through Christ who strengthens me.” Philippians...

Send flowers to the Clements family.