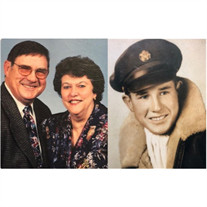 Stanley Allen Hatfield, 87, of Raymond, Washington, passed away peacefully on Tuesday, December 5, 2017 at the VA Medical Center in Vancouver, Washington. Stan was born on June 25, 1930 to Andrew Toler and Gladys (Sharp) Hatfield in South Bend, Washington. When Toler Hatfield (better known as â€œToadâ€ ) passed away at the age of 37, Gladys was unable to care for Stan and his brothers, Everitt and Ronald. The brothers went to live with Benjamin and Tillie Saunders in Nahcotta. The 3 brothers were very happy to have been kept together and enjoyed life on the Saundersâ€™ family farm. Stan attended Illwaco High until 1947, when he left for a short stint in the United States Merchant Marines on board the â€œCoastal Buccaneerâ€ for the Alaska Steamship Co. Next, he joined the US Army Air Corps (during his service it became the US Air Force) where he attained the rank of Sergeant before being Honorably Discharged in 1951 due to his arthritis. That same year, Stan met and fell in love with the beautiful Gail Briney of Raymond. Stan and Gail were married on September 1, 1951. At the time, Stan worked for the Weyerhaeuser Mill in Raymond. In December the Pacific County PUD hired him. A few years later, the couple began their family when son Kevin was born in 1957, followed by daughter Lynn in 1959, and two more sons Mark in 1962 and Brian in 1966. With their family complete, Stan and Gail worked side by side to do all they could to better their community and raise their children to be strong, independent, and honest people. During this time Stan quickly rose through the ranks at the PUD, eventually becoming the Auditor. After 27 years he retired from that position in 1978. He was also a Port of Willapa Harbor Commissioner for a number of years. He was honored with an industrial park named after him due to his service to the Port. The Stan Hatfield Industrial Park is home to many businesses and employs hundreds of Pacific County residents. Stan was active in many civic organizations including the Elks, American Legion, the Pacific County Democratic Party, Kiwanis, POOL and many others. He was an avid bowler on the Murphy Mortuary Bowling Team for many years. He also found time to coach American Legion baseball, Little League, Farm Team, girlsâ€™ softball, and T-ball. After his retirement Stan and Gail bought the ranch at Smith Creek on Highway 101. It was here Stan tried his hand at raising cows, pigs, goats, salmon, ducks and chickens as well as always growing a large garden. To fund this enterprise, he took a job driving a school bus for the Raymond School District. He enjoyed seeing the kids every day and loved when one of his former passengers would remember him and say hello when seeing him around town. Many former passengers will remember his â€˜whistle while you workâ€™ approach and catchphrase â€œIâ€™m a school bus driver now, so all my problems are behind me.â€ Stan also enjoyed the fact that he could hunt for deer and elk in between is morning and afternoon bus routes. In 1999, shortly after Gail retired from her job as the Pacific County Clerk, Stan suffered a stroke that left him disabled. With lots of hard work in physical therapy he regained much of his strength and was able to remain involved in the community and in all of his grandchildrenâ€™s activities. With Gailâ€™s loving help, he was able to remain at home until 2014 when Gailâ€™s health made it impossible for her to care for him. Stan is survived by his children, Kevin (Synde) of Portland, Lynn of Olympia, Mark (Laurie) of Raymond, and Brian also of Raymond. Brothers Everitt (Catherine) of Ferndale and Ronald (Gennie) of Raymond. Grandchildren Jameson, Tarrah, Mitchell, Chloe, Marissa, Brady, Mariah and Marina. He is also survived by great-grand daughter Emalina. He was preceded in death by his beautiful wife Gail, daughter-in-law Freddie Hatfield and his parents Toler and Gladys. Services will be held on Monday December 11, 2017 at 1:00 at the Willapa United Methodist Church in Old Willapa followed by vault internment with military honors at Fern Hill Cemetery and reception immediately following at the Raymondâ€™s Elks Lodge - 326 Third St in Raymond. Memorial donations can be made to POOL P.O. Box 249 Raymond WA 98577, which benefits the Dr. O.R. Nevitt Memorial Swimming Pool in Raymond.

The family of Stanley Hatfield created this Life Tributes page to make it easy to share your memories.

Send flowers to the Hatfield family.