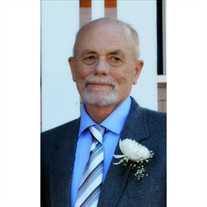 Skip Allison, a South Bend resident, died Tuesday, April 17, 2018 at the Willapa Harbor Hospital after an extended illness. He was 66. Skip was born October 24, 1951 in Miles City, Montana to Carl Sr. and Ramona Allison. Skip graduated from Raymond High School in 1970. He joined the Marines in 1971 and was honorably discharged. Skip married Deborah Triplett June 29, 1983 in Long Beach, Washington. She survives at the family home in South Bend. Skip held several jobs throughout his years, including: the Weyerhaeuser Mill, City of Raymond Fire Department, engineering on an Alaskan crab boat, Benâ€™s Exxon, Harbor Rock, Inc., Hawkâ€™s Superior Rock, Schermer Construction and Quigg Brothers. He was a volunteer for the City of South Bend Fire Department and he served as a Pacific County Sheriffâ€™s Reserve for several years and was hired as a regular deputy in 1997. He worked in that job until he was medically retired in 2005. Skip enjoyed hunting, fishing and creating stained glass in his spare time. In his final years, Skip helped babysit his grandchildren. They gave him much love and happiness. Skip is survived by his wife Deborah of South Bend, his three daughters, Janis (Tyler) Vanderpool of Raymond, Jessica (Matt) Goodwin of Elma, Jennifer Allison of Raymond and his son Jon (Erica) Allison of McCleary, seven grandchildren and one great-grandchild. Skip is also survived by two sisters, Sharon Spurrell of Raymond and Judy Steger of Grand Saline, Texas. Donations in Skipâ€™s memory may be made to a charity of organization of your choice. The family would like to specially thank Dr. Hing, Dr. Barnett, the staff at Willapa Harbor Hospital and the Raymond Ambulance crew. No memorial service is planned at this time. Cremation arrangements are in care of Stollerâ€™s Mortuary in Raymond, WA.

The family of Skip Allison created this Life Tributes page to make it easy to share your memories.

Send flowers to the Allison family.