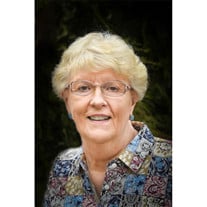 Sharon Lee Davis Coulter died peacefully at Overlake Hospital in Bellevue, Washington, on November 5th surrounded by her family. She was born to Ron Davis and Leola Sterling Davis in Raymond, Washington in 1939. Sharon was raised in South Bend, Washington, and graduated from South Bend High School in 1957. After high school, she traveled to Pullman, Washington with her high school sweetheart James Coulter to attend Washington State College. Two years later they were married. Sharon raised three children in the 1960s in Northern California and Bellevue, Washington. She was a homemaker while the children were in school, and later worked at Group Health Eastside Hospital, where she was on the front line of consumer relations. She retired in 1996. In retirement, she enjoyed traveling and winter stays in Surprise, Arizona and Palm Springs, California. Her five grandchildren gave her great joy in her retirement years. She loved her grandchildren and just couldnâ€™t get enough of them. She loved holding them in her lap and reading to them, and they loved being held by her. Sharon was an avid reader, with stacks of books surrounding her even in her final days. She was always waiting for her next book. She said she could tell if a book was going to be good when she felt goosebumps when reading from a random page. She always had a bag of random crochet projects next to her, often working on things for friends and grandkids. Sharon was a strong woman, and despite decades of various medical issues, she rarely complained. She enjoyed keeping up with old school friends with annual luncheons and reunions. Her dear friends followed her and remained close as she moved from the family home to new homes and found friends in her retirement community in Trilogy at Redmond Ridge playing cards, coffees, and luncheon invites kept her weeks full. Sharon is survived by her devoted husband of 58 years, James Coulter, her sons Brad of Seattle (Kristin) and Scott of Bothell (Brenda), her daughter Kristi of Bellingham (Marcus), and her five grandchildren Cassady, Dylan, Quincy, Callahan and Redding. She is also survived by her brother Gary Davis of Indio, California, and numerous nieces and nephews. She was preceded in death by her parents, and her sister Jean Davis Hegg. Sharon will be interred at Fern Hill Cemetery near Raymond, Washington. A family service will be held at the gravesite. A celebration of her life will be held at a later date. In lieu of flowers, donations may be made to the Pacific County Museum and Historical Society at P.O. Box P, South Bend, WA 98586. Arrangements are in care of Stollerâ€™s Mortuary in Raymond.

Sharon Lee Davis Coulter died peacefully at Overlake Hospital in Bellevue, Washington, on November 5th surrounded by her family. She was born to Ron Davis and Leola Sterling Davis in Raymond, Washington in 1939. Sharon was raised in South Bend,... View Obituary & Service Information

The family of Sharon Coulter created this Life Tributes page to make it easy to share your memories.

Send flowers to the Coulter family.