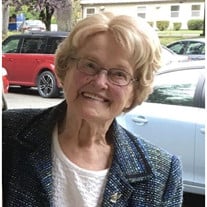 On December 13, 2016, Sally Remington, 91, of South Bend, Washington, left this world to be reunited with her husband, Lawrence. The couple would have celebrated their 70th wedding anniversary on Dec. 7, 2016. Selma Cecelia Ring was born in Naselle, Washington, on April 18, 1925 to August and Alma (Niemi) Ring. As a young child living on the family farm on Parpala Rd. in Naselle, Selma was nicknamed â€œSallyâ€ , named after her sister Evaâ€™s cow. Sally attended grade school in Ilwaco and then came to live with her sister Vivian in South Bend her 7th grade year. Vivian was caring for Bill Remingtonâ€™s children at the time, so Sally, 13 yrs. old at the time, was introduced to Lawrence Remington. When World War II broke out, Sally moved to Portland and worked with her father at the Swan Island shipyards and with her sister Eva at a factory that made bomb fuses. The job she talked about the most though was working at the Bluebird Bakery on Killingsworth St. in Portland. Sally left Portland to live with her brother Clarence and his wife in Bakersfield, California, and later moved to Los Angeles to live with her sister Gladys and her husband Owen, where she took care of her nieces and nephews. In January, 1946, Sally returned to Portland. Before starting her new job at a Portland bakery, Sally went to visit her sister Vivian in South Bend. Sally and Vivian saw Bill Remington in town and he invited them to his home. The visit proved to be a life changing moment for Sally. Lawrence was home from the service and that handsome Marine swept Sally off her feet, and she never made it back to Portland. On December 7, 1946, Sally and Lawrence were married at the Immaculate Conception Catholic Church in Raymond, Washington. They lived their entire married life in South Bend. The couple was blessed with 10 children, 17 grandchildren, and 17 great grandchildren. Sally and Lawrence provided a loving home for their family. Sally welcomed family and friends to her home with hugs that left an imprint on their hearts. Sally was a daycare provider for many years, and several of those she cared for still keep in touch with her. She was passionate about keeping families connected through family reunions, phone calls, or Facebook. She enjoyed having her own Facebook page so she could communicate and receive pictures from family and friends. In the past few years, Sally found joy in watching Richard Sherman and the Seahawks. She was known for making popcorn balls every Halloween for her favorite trick-or-treaters. She was a talented lady, making beautiful silk flower arrangements and the best pies ever. She also enjoyed gardening and flowers. Sally was preceded in death by her parents, August and Alma Ring, her brothers, Lawrence, Clarence, Robert, and Victor; her sisters, Gladys Jensen, Vivian Bigelow, Eva Driscoll, and Louise Lehl; her husband Lawrence, and a grandson, Christopher Thompson. She is survived by her children, Jim Remington (Marcia), Janet Decker, Dick Remington, Loraine (Vic) Garrone, Roy Remington (Cheryl), Joanne (Elroy) Thompson, Larry Remington, Jeannie (Lloyd) Briscoe, Kathy Remington, and Marla McGourty as well as two brother-in-laws Robert (Shorty) Remington and Albert (Red) Remington. Also surviving are 16 grandchildren, 17 great-grandchildren, and numerous nieces and nephews. A private family inurnment was held at Fern Hill Cemetery where Sally was laid to rest with Lawrence. A Memorial Mass and Celebration of Life will be held on Saturday, January 21, 2017, at 12:00 noon at St. Lawrence Catholic Church in Raymond. Arrangements are in care of Stollerâ€™s Mortuary in Raymond.

On December 13, 2016, Sally Remington, 91, of South Bend, Washington, left this world to be reunited with her husband, Lawrence. The couple would have celebrated their 70th wedding anniversary on Dec. 7, 2016. Selma Cecelia Ring was born in... View Obituary & Service Information

The family of Selma Remington created this Life Tributes page to make it easy to share your memories.

Send flowers to the Remington family.