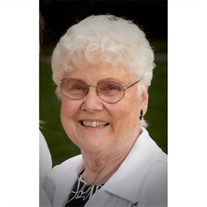 Sally Ann Gillies passed away early Monday morning February 27, 2017 in South Bend, WA. She was born in Raymond, WA on April 3, 1929 to Dewey and Nell Lybecker. She is survived by her four children, Scott Gillies of Seattle, Don Gillies (wife Debbie) of South Bend, and Pat Gillies (wife Ann) of Monroe, 1 daughter, Ann Gillies (husband Jerry) of Boise, ID, 8 grandchildren (Brian, Jamie, Philip, Robert, Michael, Kelsey, Lauren, and McKenzie) and 2 great grandchildren (Emily and Ethan). She was preceded in death by her husband Cliff in 2004. Sally was born and spent her early years growing up in Raymond. She was raised with a brother Charles (deceased) and sister Sylvia (Portland, OR). The family then moved to Gig Harbor, WA where she finished high school. She then attended Washington State University where she met her husband Cliff. They were married on June 9, 1950 in Gig Harbor. After graduation Cliff and Sally lived in Monroe and then Snohomish until eventually moving back home to South Bend in 1994. After raising her children, Sally went back to college and earned a degree in Early Childhood Education from Western Washington State University. She loved children and enjoyed working with them in early education projects for a number of years. She also taught Early Education classes at Everett Community College. Sally traveled the world with friends and family on many occasions. She was active in her community as a member of Propylaeum, Christmas Club, PEO, Bridge Club, Methodist Church, and Purple Ladies. She cherished 60 years of annual reunions with her special college sorority friends. She loved life and enjoyed everyone she met. She will be missed greatly by her family and friends. A celebration of her life will be held at the United Methodist Church in South Bend on Sunday, March 12 at 2 PM. In lieu of flowers, the family requests that any remembrances be made as a donation to the United Methodist Church of South Bend. Cremation arrangements are in care of Stollerâ€™s Mortuary in Raymond.

The family of Sally Gillies created this Life Tributes page to make it easy to share your memories.

Send flowers to the Gillies family.