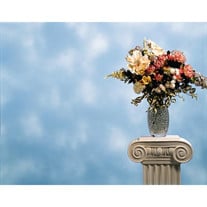 Ruth Ann Clevenger Allen Drazil was born to Lorenzo â€œDowâ€ and Mary (Blakely) Clevenger at home in Glenoma, WA on December 28, 1929. She died June 30, 2014 at age 84 at her home in Centralia. She attended school in Glenoma and Morton. She was the first of three generations to attend the Glenoma School. Ruth married â€œPeteâ€ Allen in June of 1947. They had two sons, Gary and Jerry, who survive her. Ruth and Pete had a busy and productive life together. They pastured a church in Glenoma and traveled across the U.S. evangelizing. They made a trip to Jamaica to preach. They sacrificed their homes when they felt impressed to do so. They were always rewarded with being able to later build a bigger, better house. This life ended on May 9, 1978. Ruth worked in hospitals and nursing homes as head of the housekeeping department or as dietary manager. In 1998 Ruth married Joe Drazil on March 26th. They were married for 15 years until Joeâ€™s passing in March of 2013. They provided each other with a high quality of life. She is survived by, in addition to her sons, their wives: Ella and Loretta; grandsons David (Kayla) of Utah and their four children and Jeremy (Jennifer) of Australia and their two children. Also surviving her is one brother Merle (Betty) Clevenger of Glenoma, special relatives of Joeâ€™s and many nieces and nephews. Preceding her in death were her siblings, Leonard (Dutch) Clevenger, Audrey Havgar, Paul Clevenger, Lloyd Clevenger and Ruby Clevenger. Also preceding her in death were three grandsons, John, Mathew, and Stephen. Ruth was a â€œsecond motherâ€ to many family members and foster children. She was an avid collector and creator of dolls. Ruth chose to be cremated and have her ashes placed with Joeâ€™s and his sister Lillyâ€™s ashes. They will be placed at a special spot on the farm that Joe owned for many years. Ruth was Lillyâ€™s caregiver for several years. A memorial service will be at a later date. Arrangements are in care of Stollerâ€™s Mortuary in Raymond.

Ruth Ann Clevenger Allen Drazil was born to Lorenzo â€œDowâ€ and Mary (Blakely) Clevenger at home in Glenoma, WA on December 28, 1929. She died June 30, 2014 at age 84 at her home in Centralia. She attended school in Glenoma and Morton. She... View Obituary & Service Information

The family of Ruth Drazil created this Life Tributes page to make it easy to share your memories.

Send flowers to the Drazil family.