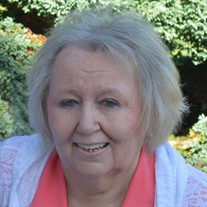 Rosita Ann Williams, 73, of South Bend passed away on Monday, June 22, 2020 at Tacoma General. Rosita was born on February 26, 1947 in Raymond, WA to Rose Ellen (Parker) and Lawrence Knutson. She attended school at Willapa Valley School District and played drums in the WVHS Marching Band during her high school career. Rosita married the love of her life, Billy Williams on September 5, 1964 in Raymond, WA. They celebrated their 55th wedding anniversary this past year before her beloved husband passed away. Billy and Rosita have three children; Tina (Dave) Chapman of Raymond, Teresa Rucker (Mike Gleason) of South Bend, WA, and Dan (Marcy) Williams of South Bend, WA. The true blessing of her life came with the arrival of her grandchildren: David Christian, Sarah Chapman, Tyler Christian all of Raymond; Kody Rucker of Vancouver, WA; Kayleigh (Jessi) Neeley-Rucker of Salt Lake, UT; Kenzie Rucker, Brittney (Frankie) Pickernell, Shelbie Williams, Allie Williams, Ethan Williams all of South Bend, WA. Rosita was preceded in death by her grandchildren, Jessie Joe Williams and James Allen Christian. Further blessings were bestowed upon Billy and Rosita with the arrival of the great grandchildren; Lydia, Tegan, and Maya Christian, Paisley and Emersyn Pickernell, Madisyn San, Jackson Garcia, and Dalilah Thomason. Rosita was well known by many as an excellent cook at the Bowling Alley in South Bend. She was famous for her wonderful soups that attracted a loyal, daily lunch crowd. In addition to spending her years as a cook, she previously worked in canneries, packed shakes at a cedar mill, and was a dog groomer. Rosita was also well known for her wonderful shrimp salads she would for family functions-they were the best! Rosita’s family was most important to her, especially her grandchildren. She spent many great times making memories with family on road trips which included visiting Disneyland, Reno, Yellowstone, San Francisco, Mexico, and Salt Lake City. She also loved talking on the phone with family members and friends, nightly rides around South Bend and Raymond, planting her flower baskets each year, pampering her dog Brandy, and making Holidays special for all that knew and loved her. She will be terribly missed by all. Rosita was preceded in death by her beloved, Billy; her sisters Sue Mullins and Jackie Cable; her brother Larry Knutson, her nephew Scott Williams, her parents Rose and Lawrence Knutson; and her grandsons James and Jessie. Due to the pandemic crisis affecting us all, we have postponed any celebration of life plans at this time. We will plan for one in the future when our society opens up and we can gather to celebrate the wonderful life of such an amazing person, mother, sister, wife, grandmother, aunt, and friend.

The family of Rosita Ann Williams created this Life Tributes page to make it easy to share your memories.

Rosita Ann Williams, 73, of South Bend passed away on Monday,...