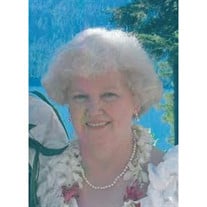 Rosa â€œMammyâ€ Mae Wampler, age 77, a longtime resident of Raymond, Washington, passed away peacefully at home into the arms of her Savior on October 28, 2015. She will be forever missed by her family and friends. Rosa was born on December 10, 1937 in Pound, Virginia to William and Lydia Collins. Due to her step-fatherâ€™s illness, she did not finish high school. Instead, she worked to support her family. Rosa met the love of her life, Paul Wampler, at church when they both were quite young. They began dating when she was 18 and they became husband and wife five months later. Rosa was a long-time member of Crossroads Assembly of God where she taught Sunday school for 45 years and was actively involved in the churchâ€™s womenâ€™sâ€™ ministries. She was also a member of the Red Hat Society. A homemaker at heart, Rosa enjoyed cooking --- especially holiday meals; taking trips to Mount Rainier with â€œDaddyâ€ Paul, reading, traveling to Barry Manilow concerts with daughter, Deborah; and hosting family events. No one could prepare a Thanksgiving or Christmas meal like Mammy! Most of all, Rosa shined when she could spend time with her precious grandchildren and great-grandchildren. Her beaming smile and warm embraces for each of them will never be matched and will never be forgotten. Rosa is survived by her husband, Paul Wampler, of Raymond. They were married August 25, 1956 â€" 59 beautiful years. She is also survived by her sister, Dreama Barnett, of Lake Wales, Florida; four daughters, Diane Hadi and husband, Kourosh, of Bothell, WA; Deborah Johnson and husband, Randall, of Bothell, WA; Paula Gonzalez and husband, Arturo, of Adna, WA; and Dreama Deskins and husband, Gary, of Toledo, WA. Other survivors include 10 grandchildren: Jeffrey Wampler and fiancÃ©e, Jill; David Johnson and wife, Taryn; Krystal Daw and husband, Jeffrey; Ali Reza Hadi and fiancÃ©e, Rebecca Humphries; Saum Hadi, Leeda Hadi, Rachel Deskins, Matthew Deskins, Michael Gonzalez, and Alanna Gonzalez; and 6 great-grandchildren: Caleb Daw, Katelyn Daw, Aidan Deskins, Gavin Davis, Ismael Idrissi, and Elijah Gonzalez. Rosa was preceded in death by her mother, father, step-father, three brothers and two sisters. A celebration of Rosaâ€™s life and legacy will be held on Monday November 2, 2015 at 11am at Crossroads Assembly of God church in Raymond. A viewing at the church will preceded the service from 10:30am-11am.

Rosa â€œMammyâ€ Mae Wampler, age 77, a longtime resident of Raymond, Washington, passed away peacefully at home into the arms of her Savior on October 28, 2015. She will be forever missed by her family and friends. Rosa was born on December... View Obituary & Service Information

The family of Rosa Wampler created this Life Tributes page to make it easy to share your memories.

Send flowers to the Wampler family.