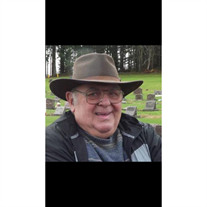 Robert Michael Johnson, lifetime Raymond resident, died Monday, January 8, 2018 at his home; he was 75. He was born to Michael and Betty Johnson at Riverview Hospital in Raymond March 7, 1942. Bob graduated from Raymond High School in 1960 and Grays Harbor college in 1970. He is survived by his wife of 52 years, Karen, son Rob, daughter Stephanie, granddaughters Kirshyn, Madison and Janessa, grandson Seven, sister and brother-in-law Carol and Smit Baldwin, numerous nephews and nieces, cousins, and his beloved fur babies, Bear and Joni. Bob was an active Boy Scout as a youth, earning the rank of Life Scout. He was Scout Master for Troop 36 for many years, earning the Silver Beaver Award, and later served on the troop committee. He led the scout troop on outings, completing 50 and 100-mile hikes in the Olympics. Bob was a Life Member of the Raymond Elks, he also served as a volunteer fire fighter for 28 years and a 3 term Fire Commissioner. He was instrumental in establishing the fire departmentâ€™s ambulance service, and wrote the grant to get the new tender at the Menlo Fire Station. Bob also held the position of Auditor for Pacific County for 4 terms, as well as being credited for establishing Pacific Countyâ€™s transit system. He was President of Pacific and Grays Harbor County Farm Bureau. Bob had retired from the County to be a farmer on Johnsonâ€™s South Fork Ranch, raising bison, cows, and his garden. He also enjoyed working on his old cars and being a crew chief and engine builder for his sonâ€™s race cars. Memorials services will be held 1:00 p.m. Saturday, January 20, 2018, at the Willapa Methodist Church. In lieu of flowers memorial donations may be made to the Willapa Methodist Church, Grays Harbor Paws or North Beach Paws.

Robert Michael Johnson, lifetime Raymond resident, died Monday, January 8, 2018 at his home; he was 75. He was born to Michael and Betty Johnson at Riverview Hospital in Raymond March 7, 1942. Bob graduated from Raymond High School in 1960... View Obituary & Service Information

The family of Robert Johnson created this Life Tributes page to make it easy to share your memories.