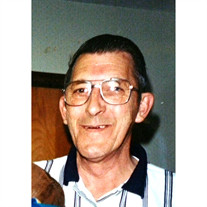 Robert L. Brunstad, a longtime Raymond resident died Friday, November 15, 2013 at the Willapa Harbor Care Center, he was 79. Bob was born November 23, 1933 in Hoquiam, Washington to Bastian Leonard and Martha Viola Matilda (Gustafson) Brunstad. Bob graduated from Raymond High School in 1951 and was immediately recruited into the United States Army. He served as a sergeant during the Korean War, assigned to Graves Registration during â€œOperation Gloryâ€ . In 1956 he worked for the Washington State Department of Transportation until his retirement in 1983. Shortly after, Bob went on to work for Dennis Company in Raymond until again retiring in 2004. He was a member of the Raymond Eagles Club, where he was a Golden Eagle, a member of the Menlo Methodist Church, Our Saviors Lutheran Church as well as a member of the Willapa Harbor Lions Club. He enjoyed participating in the Lions Club Paper Drop and selling the Lions Club Calendars. Bob loved his yard work, especially mowing the grass. Anything on the television that involved boxing, he was watching. Bob loved his grandchildren, cribbage games and his coffee. He was very proud of his Norwegian Heritage and talked about it often. Barbara and Bob also enjoyed cruise vacations with long time best friends Bob & Alberta Robinson. He enjoyed hanging out at the Menlo Store and Dennis Co., always teasing the ladies. They jokingly called him the â€œMayor of Menloâ€ . Bobâ€™s great sense of humor will be missed. He married Barbara Rohr in Raymond, WA May 11, 1957. She survives him at the family home in Menlo. Together they had two daughters and a son, Deanna Kaye (Michael) Erickson of Aberdeen and Susan Lea (Daniel) Borg of Menlo and Terry Leonard (Teresa) Brunstad of Chehalis, WA. Bob is also survived by a sister Linda Brunstad Dicey of Eugene, Oregon and his 7 grandchildren: Larissa Rohr, Hayley & Morgan Erickson, Joshua & Brycen Brunstad and Corbin and Claire Borg. A private family inurnment will be held at the Fern Hill Cemetery in Menlo. Memorial services will be held at Noon on Saturday, November 23, 2013 at the First Lutheran Church in South Bend. You may send donations to any Food Bank or charity of your choice in memory of Bob.

The family of Robert Brunstad created this Life Tributes page to make it easy to share your memories.

Send flowers to the Brunstad family.