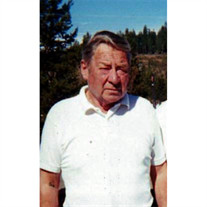 Richard \\\Dick\\\" Dale Runyon,88, of Raymond, Washington passed away on July 11, 2015 at the University of Washington Medical Center in Seattle, Washington. He was born on June 30, 1927 in Spokane, Washington to Harold and Laura Runyon. He grew up in Raymond, Washington and attended Raymond High School where he was active in band, basketball, track, football and many other activities. Following high school, he joined the United States Maritime Service (Merchant Marine). He later joined the 45th Infantry Division of the United States Army and served in the Korean War. Dick married Lillie Mae Runyon on April 7, 1956 and they made their home in Raymond, Washington with their four children. He worked for HG Runyon where he ran heavy equipment. Later he worked for Hawkâ€™s Superior Rock for many, many years. In all, he worked 65 years in the industry. He was active in coaching youth baseball and received an honor in 1972 for his â€œmany years of devoted service to baseball. Dick enjoyed hunting, fishing, clamming, and attending and watching Seattle Mariners and Seattle Seahawks games. He was very active in his later years and was still able to dig his own limit of razor clams less than a year ago (oftentimes getting his limit before his sons got theirs). He enjoyed the daily visits from the resident deer on their property in Raymond and always made sure they were well fed. He loved his family and will be dearly missed. He is survived by his son, Mike Runyon of Raymond, his wife, Ann, grandchildren, Michael, Mitchell, Rikki and Rosalyn; son Rich Runyon of Chehalis, and his wife, Janelle and grandchildren Alison and Aaron; son Steve Runyon of Oregon and his wife, Copper; daughter Carolyn Maughan of Portland and granddaughter, Samantha. He had 12 great grandchildren. Preceding him in death were his wife, Lillie and brothers Doug, Bud and Harold. Graveside services will be held at 11 a.m. on Saturday, July 25th at the Fern Hill Cemetery in Menlo. A celebration of life will be held August 15th at 1 p.m. at the Elks Club in Raymond. Memorials may be made in Dickâ€™s memory to the Willapa Harbor Helping Hands and the Willapa Harbor Baseball Association. Cremation arrangements are in care of Stollerâ€™s Mortuary in Raymond.

Richard \\\Dick\\\" Dale Runyon,88, of Raymond, Washington passed away on July 11, 2015 at the University of Washington Medical Center in Seattle, Washington. He was born on June 30, 1927 in Spokane, Washington to Harold and Laura Runyon. He... View Obituary & Service Information

The family of Richard Runyon created this Life Tributes page to make it easy to share your memories.

Send flowers to the Runyon family.