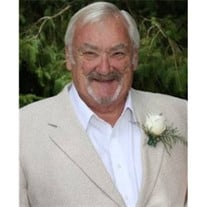 Richard Allen Martin, 79, a Raymond resident passed away Wednesday, November 27, 2013 in South Bend, WA surrounded by his family. Rick was born in Vancouver, WA on June 8th, 1934 to P.F. Martin and Laura J. (Dahl) Martin. He grew up in Orchards, WA with two sisters and three brothers. He often told of going to five different high schools following his family along the Columbia River on different jobs and graduating at Richland High School in 1952. Rick moved to the Seattle area and worked for a time at Boeing while racing motorcycles on the AMA Circuit with the Tacoma Ducks motorcycle club. He met Pat Sevilles on her birthday Sept. 27th 1956 at the Newaukum grange dance. They were married on Dec. 1, 1956 because he was drafted into the Army leaving on Dec. 7th. He trained at Ft. Belvor, Virginia and was stationed in Rhode Island. Pat followed him there where Richard Lee was born. Then once home again, he worked for Howard-Cooper Corp. as a mechanic then Patrick Lynn and Kerri Joanne were born. Rick loved babies so five years later Lorraine Xan was born; then off to Ellensburg to live in Taylor log camp, then moved to Aurora. He went to work for Austin-Western Graders for 10 years before returning home to Enumclaw working for Western Power & Equip. as top salesman. He returned in 1999 and enjoyed cruising, snow birding, and golfing with friends. Rick was diagnosed with Bulbar ALS on Oct. 7th, 2013. He is survived by his wife of 57 years, Patricia Martin. Four children: Lee (Betsy) Martin of Raymond, Lynn (Colleen) Martin of Anaheim, CA, Kerri (Lenny) Cantrell of Buckley, WA and Lori (Cris) Decker of Portland, OR. Grandchildren include Kara Cantrell-Nussbaum, Brian Cantrell, Amanda Cantrell, David Cantrell, Michelle Cantrell, Kailee Martin, Michael Martin, Megan Marin and Matthew Martin. Rick had one great grandchild, Makenzie Mae (Cantrell) Balsley. He is also survived by siblings Floyd (Jill) Martin and Nancy Cram, both of Yuma, AZ. Rick was preceded in death by his parents, two brothers Donald (Mick), Gene, a sister Thelma and a grandson Brian. Memorial services will be held at 1:00 p.m. Wednesday, December 11, 2013 at the Buckley Eagles in Buckley, Washington. Arrangements are in care of Stollerâ€™s Mortuary of Raymond.

The family of Richard Martin created this Life Tributes page to make it easy to share your memories.

Send flowers to the Martin family.