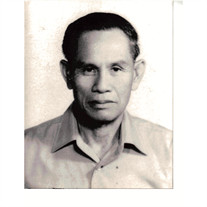 Rath Manipakone was born on January 1, 1923 to Thao and Phady Manipakone. He was born in Ban Na, Muang Nong Bok, Khamoune Providence of Laos. Rath passed away Friday, July 19th at the Willapa Harbor Hospital in South Bend. He has 3 sisters and 2 brothers. He is survived by his sister Halm. He married Khamsavay Saycocie on July 10, 1966 in Laos. They have seven children together: Khamsavanh Khousonsavath, Khamsavong Manipakone, who proceeded him in death, Luke Manipakone, Von Manipakone, Niphasone Souphom, Kinnarone Cox, and Amphaphone Manipakone. They have 8 grandchildren: Julie, Ricky, Kevin, Tammi, Brittney, Jaron, Arune, and Sunthi. One great great grand child, Logan Basil. Rath and his family immigrated to the United States on October 1986, and landed in Huston, Texas. They moved in 1987 to South Bend, Washington, where he lived for the rest of his life. Rath Manipakone was always inquisitive and wanted to learn new things. He always encouraged his children and grandchildren to study hard and achieve higher education. Rath is a very religious man. He entered the monk hood when he was just a child and followed the abbot to Thailand to study at the age of 8. He stayed in Thailand for 9 years and returned to Laos at the age of 17. He studied French for three years and worked as an interpreter for a year before joining the police force. He worked for 3 years and decided to further his studies in law in Thailand in 1956. He studied law at the Police Academy in Bangkok, Thailand for four years earning a master degree in law. He returned to Laos and continued his job as a policeman until 1962 when he entered the arm forces. He served in the arm forces until 1968. He rejoined the police force as a Police Captain in Champone Province after he left the arm forces in 1968 and stayed until 1975 when he was taken to the reeducation camp in Sayphone. He was released in 1983 and entered a refugee camp in Thailand at Soon Napole in 1985. After he immigrated to the United States, he converted to Christianity and found the Lord after he was introduced to the United Methodist Church of Raymond. He has been a member of the church since 1987. Rathâ€™s hobbies included watching Thai soap operas, watching sports, reading, and gardening. He also loved game show. His favorite game show included Jeopardy, Wheel of Fortune, and the Price of Right, and Who Wants to be a Millionaire. He also played many sports when he was young. He was very health conscious and ate a lot of fruits and vegetables. He walked a mile a day, every morning and evening. He was very disciplined. His children and grandchildren remembered him as being very strict and traditional. Everything had to be neat and orderly. He instilled in us the value of hard work, honesty, and the value of education, and family. Though we did not like it at the time, it had made us into who we are today and we are very thankful and grateful for it. We will always remember his sense of humor and his curiosity, which kept us on our toes and kept us laughing through the toughest of times. Buddhist Services will be held at 10:30 a.m. Thursday, July 25th at Stollerâ€™s Mortuary in Raymond with cremation to follow at the Fern Hill Crematory in Aberdeen, Wash.

Rath Manipakone was born on January 1, 1923 to Thao and Phady Manipakone. He was born in Ban Na, Muang Nong Bok, Khamoune Providence of Laos. Rath passed away Friday, July 19th at the Willapa Harbor Hospital in South Bend. He has 3 sisters and... View Obituary & Service Information

The family of Rath Manipakone created this Life Tributes page to make it easy to share your memories.

Send flowers to the Manipakone family.