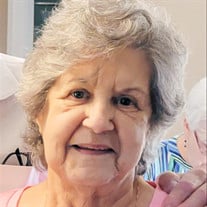 Phyllis E. McCoy June 16, 1947 – September 19, 2021 Phyllis McCoy was a caring, devoted and loving wife, mother, grandmother, great grandmother, sister, aunt and friend. She passed away at her home in Raymond, WA on September 19, 2021. Phyllis was born on June 16, 1947 in Birchtree, Missouri to Charley Lee Gall and Viola Maxine Gall. She married her husband Paul in 1965 and raised three children while moving to many different locations throughout Paul’s career in the Army. When Paul retired from the Army the family moved to South Bend, WA, where Phyllis continued to raise her three children and 2 of her grandchildren. She is survived by her sons Robert McCoy and James McCoy, daughter Gina Beason, 7 grandchildren, 4 great grandchildren, brother, Charley (Chuck) Gall Jr., sisters, Judy Kinney and Myrcena Ashley, and numerous nieces and nephews. She was preceded in death by her husband, Paul McCoy, her daughter Jeanette McCoy, her brothers Hershall Gall and Monte Gall, and her sister Rhoda Gall. A private service was held for the family on September 25, 2021. Condolences may be sent to 20232 SE 262nd Street, Covington WA 98042.

The family of Phyllis Elaine McCoy created this Life Tributes page to make it easy to share your memories.

Send flowers to the McCoy family.