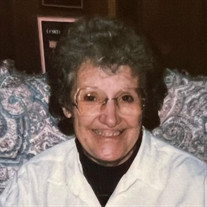 Peggy Joann Spoor passed away Wednesday, November 17, 2021 at Willapa Harbor Hospital in South Bend; she was 85. She was born December 5, 1935 to Preston T. And Vinice (Weatherington) Apperson in Durango, Colorado. Peggy graduated from Raymond High School and also attended Northwest Bible College. On March 29, 1958 in Raymond, Peggy married Charles “Chuck” Spoor who preceded her in death (2018). She was a member of the Women’s Ministries at the Assembly of God, a member of Willapa Harbor Hospital women’s auxiliary, and was also a Sunday school teacher for many years. Some of her hobbies included reading, crocheting, camping, and spending time with family. Preceding her in death are her parents, her husband Chuck, and nephew whom she raised Ken Blatnik. She is survived by her sons Larry (Tammy) of South Bend, Chuck (Mindy) of South Bend, Gary (Vicki) of Raymond, and Rod (Sharon) of Raymond. Also surviving Peggy is her daughter Charlene (Ron) Hamlin of Lacey, her brother Tom (Lois) Apperson of Raymond, her Sister Ruth (Elbert) Christensen, 14 grandchildren and 15 great grandchildren. A memorial service will be held for Peggy on Saturday, November 27 11:00 a.m. at CrossRoads Church in Raymond. In lieu of flowers, donations may be made to Willapa Harbor Hospital Foundation at 959 Barnhart St. Raymond, WA 98577. Arrangements are in care of Stoller’s Mortuary in Raymond, Washington. You may visit www.StollersMortuary.com to leave condolences for the family.

The family of Peggy Joann Spoor created this Life Tributes page to make it easy to share your memories.

Send flowers to the Spoor family.