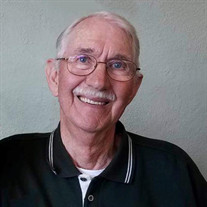 Paul Arthur Waldref, age 84, passed away peacefully on Sunday, March 13, 2022. Paul was born October 10, 1937 in Chehalis, Washington to Bert S. and Cora L. (Penewell) Waldref. Paul graduated from Willapa Valley High School in 1955. Paul married the love of his life, Earlene (Frasier), on February 10, 1956. Together they had 3 children and made their home and livelihood on a dairy farm in Menlo for 31 years. Paul retired from dairy farming in 1993. He continued to make his home on his pastureland in Menlo until his death. Paul was a true dairyman through and through. Paul and his family were awarded Darigold’s Dairy Family of the Year award in 1976. Even after retiring, Paul continued to help local farmers put in their silage and hay. He also leased his pastureland to grazing cattle, and built his days around “checking the cows,” making sure they were safe and content. His love of nature and animals was also expressed through his careful attention to his lawn and flower beds, dotted with wild Easter lilies that he would bring home to Earlene and tidy bird houses that he made sure were ready every spring to welcome the mama birds. Paul also served on the Willapa Valley Water District Board and the Pacific County Noxious Weed Control Board and drove school bus for Willapa Valley High School. He brought home amusing stories and decorated his office with the sweet mementos that he received from the students. Paul and Earlene enjoyed traveling together and spending time with friends and family. They were members of the Belles & Buoys camping club for 30 years. They also loved to western line dance and enter their ‘57 Chevy and ‘56 Ford Sunliner convertible in car shows and parades. Paul would always say, “A family that plays together, stays together,” and he captured so many of his family’s playful moments on video or film; Paul was an avid photographer and videographer and gifted his family with a loving record of each new baby, holidays, cousin play-dates, bountiful gardens, and other sweet memories. Paul is survived by his loving wife of 66 years, Earlene; daughters Paulene (Gene) Maneman and Laurie (Ron) Friese; grandchildren Brian (Abby) Konigsberger, Mindi (Matt) Rumbles, Brandon (Marie) McAllister, Brianne (Luke) Probasco, Jared (Madison) McAllister, Stacy (Justin) Lorton, Allen Paul Waldref, Abby Maneman, Tracey Maneman, Todd Maneman, and Kyle (Meagan) Maneman; 22 great-grandchildren; and many nieces, nephews and great-nieces and -nephews. Paul was preceded in death by his son Allen Dale Waldref. A graveside service will be held at Fern Hill Cemetery in Menlo (100 South Fork Road) on Monday, March 28 at 2pm. A reception to celebrate Paul’s life will immediately follow the graveside service at the Elks Lodge in Raymond (326 3rd Street). Memorials may be made in Paul’s name to Willapa Valley High School FFA (In Memory of Paul Waldref) (PO Box 128 Menlo, WA 98561) to support students pursuing careers in agriculture.

The family of Paul Waldref created this Life Tributes page to make it easy to share your memories.

Send flowers to the Waldref family.