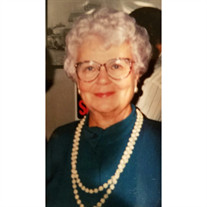 Norma Baker Olsen, a lifelong South Bend resident passed away at her home on Saturday, May 14, 2016. Norma was born on February 5, 1926 at the old south Bend Hospital (current site of Koplitz Fieldhouse). She was the youngest daughter of local businessman Norman Baker and his wife Ruby. She was educated at South Bend Schools and graduated in the class of 1944. She then attended Seattle Business College living with her sister Marjorie. The following year she was hired by the PUD office in Raymond. A year later she took a job with the old district department of health where she made lifelong friends and mentors. On December 14, 1946 Norma married Clyde Olsen in a ceremony in Vancouver, WA. Clyde had just returned from three years in the US Marine Corps stationed in the South Pacific theater during WWII. They were married for 63 years until his death in December of 2009. Norma had stopped working to raise their boys but in 1962, while remodeling their house on Alta Vista, she took a job as a secretary at South Bend High School. She left the school as the boys were approaching high school age but stayed busy. She kept the books for Clydeâ€™s timber cutting business and for the oyster farm. She also served as the treasurer for the South Bend United Methodist Church for several years where she was a devoted member. She was also a lifelong member of the Daughters of the American Revolution (DAR). One of her favorite â€˜jobsâ€™ was volunteering at the South Bend elementary school as a reading assistant which she started doing as her grandchildren entered the South Bend schools. She loved her books and this was a way to share her love of reading with young minds as well as spending many hours at home reading to and with her grandchildren. After Clydeâ€™s retirement they enjoyed trips to Hawaii, annual trips to Seaside with the grandkids, attended many Second Marine Corps Division reunions around the country. An avid reader of English mystery novels one of her personal highlights was a special trip to England with Bruce and his family. She visited many of the locations where her favorite stories had originated including a hotel stay across the street from Scotland Yard in London. In addition to reading, Norma was an avid bird enthusiast. She turned their large backyard into a local bird sanctuary feeding just about every species of bird known to inhabit Willapa Harbor. Among Normaâ€™s other interests and hobbies was her love of history; particularly that of our family. Over the years she researched and documented many articles of historical relevance of both her family and Clydeâ€™s. This research went back over 100 years on both sides and contained some estranged or previously unknown relatives. No picture went unlabeled and nor did any corresponding story go untold. Norma is survived by her two sons Bruce (Maria) of Shoreline, WA; Phil of South Bend, daughter-in-law Lisa Olsen of South Bend, grandchildren Norman (Alyssa) of South Bend, Olivia of Shoreline and Megan (Bob) Downard who was also her very special caregiver these past few years. She is also survived by 5 great grandchildren. She was preceded in death by her parents, husband Clyde and sister Marjorie Worden. A memorial service will be held on Saturday, June 11, 2016 at the South Bend United Methodist Church at 11 a.m. Memorials may be made to Harbor Home Health Care & Hospice, South Bend United Methodist Church or Seattle Childrenâ€™s Hospital. Arrangements were in care of Stollerâ€™s Mortuary in Raymond.

Norma Baker Olsen, a lifelong South Bend resident passed away at her home on Saturday, May 14, 2016. Norma was born on February 5, 1926 at the old south Bend Hospital (current site of Koplitz Fieldhouse). She was the youngest daughter of local... View Obituary & Service Information

The family of Norma Olsen created this Life Tributes page to make it easy to share your memories.

Send flowers to the Olsen family.