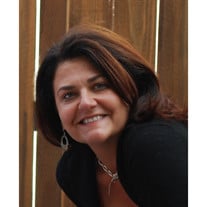 Nikki Lee (Baldwin) Moore, 46, passed away on March 15, 2016. Born January 15, 1970, in South Bend, Washington, to Jim Baldwin and Paula Strago. Nikki grew up in Frances, graduating from Willapa Valley High School in 1988. Following graduation, she moved to Phoenix, Arizona where she attended college and worked as a paralegal. Nikki returned home to Washington in 1994 to be closer to family, living in Olympia while working at the Thurston County Court House. A few years later Nikki relocated to Yucaipa, California where she married Kerry Moore and in 2006 gave birth to their son Aaron. She also worked for the City of Yucaipa for many years. Nikki is preceded in death by her mother, Paula (Strago) McDonald; grandparents, Paul and Hedwig Strago and Donald and Ramona Baldwin. Nikki is survived by her son Aaron James Moore (9) of Yucaipa, CA; father Jim (Karol) Baldwin of Peoria, AZ; father LeRoy (Janice) McDonald of Frances, WA; brother Robert (Debbie) Heide of Goldendale, WA; brother Chris (Stacy) May of Olympia, WA; sister Marci May (Brian McLavey) of Yucaipa, CA; sister Mindi (Jeremy) Bond of Florence, AZ; nephews Kenny Heide and Andrew May; nieces, Cassandra Bersing, Ashley May, Aubrey Bond, Felicity Bond and Vanessa Bond; best friend and cousin Kim (Fluke) Toepelt and numerous aunts, uncles and cousins. Itâ€™s impossible to sum up a woman who was so caring, vivacious, loving and sparkly. She enriched the lives of everyone she met. She was loved by so many and her memory will live on with us forever. Graveside services will be held at 10:00 am, Saturday, March 26 at Fern Hill Cemetery in Menlo with a celebration of life following at the Swiss Hall in Frances. Arrangements by Stollerâ€™s Mortuary.

The family of Nikki Moore created this Life Tributes page to make it easy to share your memories.

Send flowers to the Moore family.