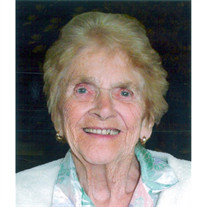 Nellie â€˜Honeyâ€™ Bode, a long-time resident of Pacific County, Washington, passed away peacefully in her sleep at home on November 9th, 2016 at age 97 of natural causes. Born March 28th, 1919 in South Bend, Washington, Nellie (Oliver) was raised on a farm on the Willapa River in East Raymond by her mother Beta (Sondell) Oliver (d.1956) along with her brother Bill Oliver and half-brothers George Matson, Ernie Matson, Charles Matson and half-sister Esther (Matson) Workington who all preceded her in death. Nellieâ€™s father William Oliver died when Nellie was a small child in a logging accident. She married the love of her life, Ivan Max Bode in 1945 in Astoria, OR. They were married 36 yrs. at his death in 1981. Nellie was quite a character who enjoyed practical jokes, she was full of love and laughter. She loved to work, animals, gardening, dancing, singing and traveling. In her teens, Nellie had a budding entrepreneurial spirit for real estate, buying her first property on the county Courthouse steps at 17yrs old. She was well known in Raymond and South Bend area for her industriousness and hard work. She became a member of Jehovahâ€™s Witnesses in Raymond in 1965. She lived many places including Chinook WA, Aberdeen WA, Sutherlin OR, Santa Barbara CA, making full circle back to reside in her hometown of Raymond. She leaves behind 5 children, Dale Bode (Nadja) of Craig AK, Sharon Utting of Raymond WA, Richard Bode (Sandy) of Fernley NV, William Bode (Mabel) of Bolivia, and Mary Irwin (Tim) of Raymond WA, 28 grandchildren and 18 great grandchildren. Nellie preferred people to celebrate life and at her request, no services will be held. She will be buried at Fern Hill Cemetery in Menlo, WA. Arrangements are in care of Stollerâ€™s Mortuary in Raymond.

The family of Nellie Bode created this Life Tributes page to make it easy to share your memories.

Send flowers to the Bode family.