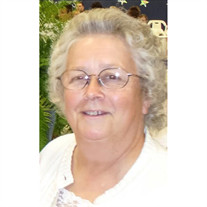 Nancy Jane Johnson, 72, of Raymond WA, passed away peacefully in Lebam WA, surrounded by her family on February 29, 2016. Nancy was born in Worcester, Massachusetts on July 23, 1943 to Newell and Doris Taylor. She graduated from Algonquin Regional High School in 1961. In the years shortly after graduation, August 3, 1963, Nancy married the love of her life, Doug Johnson. On January 9th, 1964 they welcomed their one and only son Steve Johnson. The pair and their son left Massachusetts and moved to California. After California, the family of three moved to Raymond, WA where they became lifelong residents. She was well known in the community throughout her years working at Safeway, Dicks IGA, Olympic Hardwood and the Corner Grocery where she was adored for her fun loving nature and witty character. Nancy was notorious for making people laugh. In addition to her years as a retail clerk, she dedicated her time to educating and caring for her four grandchildren. Upon retirement Nancy and her husband Doug fulfilled their lifelong dream of traveling. Nancy is survived by her husband, Doug Johnson of Raymond, Son; Steve Johnson, Daughter in law; Carolyn Johnson, Grandchildren; Steven, Andrew, Kristina, and Kari, Great-Grandchildren; Isabella, Cash, AJ, Kenlee, Mac, Kam, Canyon and Andi. She is also survived by her siblings Judy Aftosmes of Winter Garden FL, Patty and Bill DeMalia of Rockledge FL, Rick and Jaline Taylor of Ashburnham MA and David Taylor of Malabar FL. She was preceded in death by her parents, Newell and Doris Taylor, a brother Bruce Taylor, a sister Joyce Taylor and her much adored cat Muffin. Mrs. Johnson will be buried in a private ceremony on March 7th, 2016. Arrangements were in care of Stollerâ€™s Mortuary in Raymond.

Nancy Jane Johnson, 72, of Raymond WA, passed away peacefully in Lebam WA, surrounded by her family on February 29, 2016. Nancy was born in Worcester, Massachusetts on July 23, 1943 to Newell and Doris Taylor. She graduated from Algonquin Regional... View Obituary & Service Information

The family of Nancy Johnson created this Life Tributes page to make it easy to share your memories.