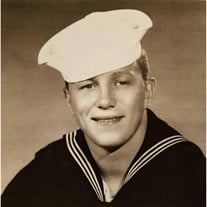 Melvin Victor Gibbons, a lifetime South Bend resident died Sunday, December 18, 2016 in Astoria, OR; he was 82. Mel was born March 17, 1934 in South Bend to Victor and Elnora (Bonnell) Gibbons. He graduated from South Bend High School in 1952, after playing football his 1950 team was inducted onto the Wall of Fame at the South Bend School in September 2016. Mel married Frances Bentley June 20, 1953 in South Bend, she preceded him in death March 20, 2015. He served in the United States Navy during the Korean War before being honorably discharged. He owned and operated Mel Gibbons Trucking Company for many years. Mel was a devoted and active member of the American Legion, he was a patriot and loved his family and his community. He enjoyed football, building model airplanes, hunting, logging and was a sharp history buff. He is survived by a son Steve Gibbons of Shelton, WA; three daughters Rhonda (Alan Stewart) Westlund of Olympia, Teresa (Brian) Olsen of Bremerton and Laurie Hobi of South Bend; two brothers James Gibbons of Littlerock, WA and Robert Gibbons of Hoquiam, WA as well as 13 grandchildren and 9 great grandchildren with one new one due January of 2017. Mel also leaves behind a very close friend Ed Frazier of Raymond. Graveside services will be held at 11:00 a.m. Saturday, January 14, 2017 at the Fern Hill Cemetery in Menlo where Military Honors will be accorded. All friends and family are welcome to gather at the Raymond Elks at 1:00 p.m. later that day to celebrate Melâ€™s life. Memorial donations may be made to the American Heart Foundations at American Heart Association PO Box 742030 Los Angeles, CA 90074-2030 or the American Diabetes Association, 2451 Crystal Drive, Suite 900, Arlington, VA 22202. Cremation arrangements were in care of Stollerâ€™s Mortuary in Raymond.

The family of Melvin Gibbons created this Life Tributes page to make it easy to share your memories.

Send flowers to the Gibbons family.