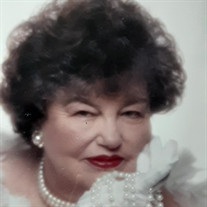 We are sad to announce the passing of our beloved mom, grandma, sister and friend, Matie Louella Ellingwood. Matie was born December 28, 1929 in Salida Colorado to Willis and Dot Reynolds. It was a day so snowy and stormy that they could not leave their house and had to call on the local vet for help. This could explain her love for animals. She especially loved "her" cats. Sorry neighbors. Just know they were well loved when they visited Matie. Her family moved from Colorado to Index, Washington where they lived for some time. Later moving to South Bend, Washington where Matie graduated in 1947. Soon after graduation, she married Robert L. Johnsen and had four daughters that they raised on Eklund Park in South Bend. Matie was a great seamstress and made most of her daughter's clothes growing up. Because of her love for animals, she taught 4-H for a time and helped with her daughter's horses. She was a fantastic baker and family always looked forward to her pies and Kringles. She also made the best cabbage soup. Sorry Pam. It's true. She later remarried to Robert Ellingwood, the love of her life, and settled in Raymond Washington where she still lived. She had multiple jobs throughout her lifetime, including babysitting, baking pies, sewing, cleaning, selling Amway and had worked at all the local canneries. Here she could schuck oysters with the best of them. She would also let visiting grandchildren pick shrimp off the conveyor for a snack. She was always thinking of other people and tried to remember to give them small gifts. She would often forget who was getting what and would make lists and notes. You might get your 10 year old birthday card when you turned 30, but you still got it. She was forever on a diet but could be caught buying fried chicken from the "little" store. She liked puzzles. She always saved the Sunday "funnies" for whichever grandchild should stop by and never ate the bananas from her lunch that Bob lovingly made her every day. She disliked pasta very much but would eat it if you served it to her. She loved traveling, especially to Hawaii and visited multiple times in her life. She also spent some time in Germany where she fell in love with cuckoo clocks. She also visited many places within the US. She is preceded in death by her husband Robert Ellingwood, her sister Betty Reeves, her brother Tom Reynolds her great grandson Gage Rohr, and her great granddaughter Nicole Kell. She is survived by her daughter Debra (James) Harden. Daughter Vicki (Bruce) Rohr. Daughter Pamela Johnsen Miller. Daughter Kimberly Johnsen. Her grandchildren James (Sabrina) Harden, Samantha (Robert) Harter, Phil Rohr, Kevin Rohr, Chris (Amanda) Rohr, Brett Rohr, Mike (Christie) Conn, Patricia Kell, Matthew (Michelle) Mason, Coltt Mason, Melissa Hays, Amanda Kallio, Travis Johnsen. 30 great grandchildren and 5 great great grandchildren. Ps. Matie is pronounced May Tee for those that have got it wrong for 91 years. Just shows how much she loved you that you were never corrected. She also had a great sense of humor. A graveside service will be held November 16, 2021 at Fern Hill Cemetery. 100 South Fork rd, Menlo, WA. At 1:00 pm. A celebration of life potluck will follow at First Baptist Church at 310 Broadway ave. In South Bend wa. Arrangements are in care of Stoller’s Mortuary in Raymond, WA. You may visit www.StollersMortuary.com to leave condolences for the family.

We are sad to announce the passing of our beloved mom, grandma, sister and friend, Matie Louella Ellingwood. Matie was born December 28, 1929 in Salida Colorado to Willis and Dot Reynolds. It was a day so snowy and stormy that they could not... View Obituary & Service Information

The family of Matie Luella Ellingwood created this Life Tributes page to make it easy to share your memories.

We are sad to announce the passing of our beloved mom, grandma,...

Send flowers to the Ellingwood family.