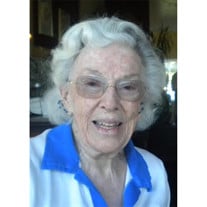 Marcelle Yamamoto passed away January 29, 2016 in Raymond, WA. She was 95. Marcelle was born October 7, 1920 in Maple Shade, NJ to parents Edward Lee Gwalthney and Anna Ethel Hoffman. She married George Brown in 1939, and they had three children: Gloria Lee, George Wallace, and Edgar Lewis. She raised her children in Moorestown, NJ. Eventually her marriage ended, and she met the man she called the love of her life, Mitsuru Yamamoto, while working as a technical librarian for RCA. They married in 1968 and later moved to the San Francisco area, where she and Mitsuru lived for many years. During this time they traveled and lived in Japan and Singapore, which was a highlight of her travels. Marcelle and Mitsuru retired to Woodburn, OR. After Mitsuru passed away in 1994, Marcelle moved to Raymond, WA to be with her daughter Gloria and son-in-law Ben. Marcelle lived in Raymond for 18 years. Throughout her life, Marcelle was a talented artist and painter, which she used to help support her family and later enjoyed as a hobby. She also was a lover of animals and was known for her support of wildlife organizations. Marcelle is survived by her son George Brown, of Valley, PA, son-in-law Benjamin Ridgway, of Raymond WA, 10 grandchildren, and 20 great grandchildren. Marcelle was known to her family as Mom or Gram, and she was a dynamic, loving figure in all of our lives. She will be celebrated and missed. At her request there will be no funeral services. In lieu of flowers, please donate to Harbor Association of Volunteers for Animals (HAVA) at 360-942-4716. Cremation arrangements were in care of Stoller\\'s Mortuary in Raymond

Marcelle Yamamoto passed away January 29, 2016 in Raymond, WA. She was 95. Marcelle was born October 7, 1920 in Maple Shade, NJ to parents Edward Lee Gwalthney and Anna Ethel Hoffman. She married George Brown in 1939, and they had three children:... View Obituary & Service Information

The family of Marcelle Yamamoto created this Life Tributes page to make it easy to share your memories.

Send flowers to the Yamamoto family.