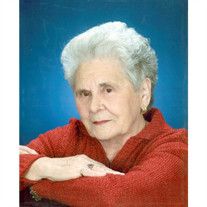 Madeleine Marie Miller, former Raymond resident, died Tuesday, October, 25, 2016 at the Alpine Care Center in Shelton; she was 87. Madeleine was born December 24, 1928 in Paris, France to Louis and Marguerite (Bouvarot) Chapuis. She grew up in France while it was being occupied by Nazi forces. She went to work at 14 years of age after her father passed to help her mother and 4 other siblings, working 12-hour days at a flower shop. Once the war was over she went to work at an American post office. During her work, she met an airman by the name of Louis. They began dating, but a short time later he was transferred to Germany where he became extremely ill. Madeleine ventured to Frankfurt where they were married September 1, 1947 in a hospital. He was put on a hospital ship to come back to the U.S. while she was on a ship from Germany to New York on Ellis Island and traveled to Washington by train, per his guidance. She stayed with a relative of Louisâ€™ in Raymond. For a short time, she worked at the Cannery in South Bend. Louis was hospitalized in San Francisco, CA. Madeleine went to be with her husband for a few months while he recovered. They didnâ€™t return to Willapa Harbor together until 1948. Upon their return, they purchased a home and started a family. The late Dr. R.A. Bussabarger asked her to become a nurseâ€™s aide for his Riverview Clinic. She had never imagined herself as a nurse, but she found that she truly enjoyed it. Madeleine loved to do handwork in her spare time, she was a member of the St. Lawrence Catholic Church and volunteered for Pennywise Thrift Store. She leaves behind children Marguerite Delbovo and her husband Frank, Bruce Miller and his wife Sarah, Suzanne Miller, Denise Williams and her husband Mark; as well as grandchildren, Jason Kohl, Danielle Sinai, Steven Williams and Jeremy Williams. She also has great grandchildren Weston and Steel Sinai, Brynn and Sydney Williams and Addison, Emerson, Presley, Williams. Madeleine was preceded in death by her husband, Louis in 2000. Memorial services will be held at 2:00 p.m. Saturday, October 29, 2016 at Stollerâ€™s Mortuary in Raymond. Cremation arrangements are in care of Stoller\\'s Mortuary in Raymond.

The family of Madeleine Miller created this Life Tributes page to make it easy to share your memories.

Send flowers to the Miller family.