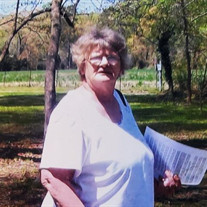 Lydia May Church, passed away Friday, July 17, 2020 at PeaceHealth Hospital in Vancouver, WA. She was born September 6,1941 in Wilmington, NC to Elbert and Elaine Lewis. Lydia had one sister and two brothers. Lydia married Clarence C. Church on October 31, 1956 in Hampton, VA. They were married over 50 years before his death in 2009. Lydia worked at the Willapa Harbor Care Center for years before retiring. She lived on the family farm in Menlo, until she moved to Centralia to be closer to family. She is survived by a son, Joseph C Church of Centralia, daughters Debbie Smith (Stan) of Raymond, Liz Lewis (Carlos) of Toledo, Darlene Neff (Dwayne) of Shelton, Marlene Prickett (Todd) of Olympia, Julie Troupe (Mike) of Aberdeen, 23 grandchildren, and 51 great-grand children. Lydia was preceded in death by her husband, a daughter, two grandsons, her parents, sister and brothers. There will be no services as her request. Donations can be made to Visiting Nurses Foundation at 222 South Pearl Street, Centralia, WA 98531

The family of Lydia May Church created this Life Tributes page to make it easy to share your memories.

Send flowers to the Church family.