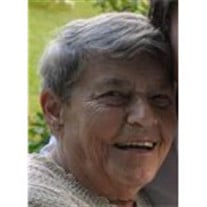 Lila Mae (Paul) Haerling, a lifetime Raymond resident, died Thursday, January 9, 2014, at the Willapa Harbor Hospital in South Bend - she was 80. She was born May 17, 1933, in Raymond to Andrew Vincent and Cora Elizabeth (Clapson) Paul. Lila married Donald E. Haerling (DW Duck) on June 29, 1950, in Raymond. He preceded her in death in 2005. She is survived by three sons and their spouses, Vernon Haerling (Gayle) of Kent, WA, Michael Haerling (Jean) of Manson, WA, and Donald Guy Haerling (Sonya) of Chehalis; two daughters and their spouses, Linda Snodgrass (Clyde) of Raymond, and Lonnie Haerling (John Dennis) of Rochester, WA. Lila is also survived by brothers, Roy Paul (Rebecca), North Carolina, and Ed Paul (Cathy), South Bend, a sister, Joy Paul-Henderson of Arlington, WA, and a step-mother, Joy Paul, of Raymond; 17 grandchildren, 18 great-grandchildren (with 3 on the way), a much-loved former daughter-in-law, Susan Haerling, of Centralia, and sister-in-law, Karen (Paul) Ellis. Lila was also preceded in death by her granddaughter, Patricia Haerling, and her brother, Walter Paul. Lila was a long-time member of the national Womenâ€™s Bowling Congress, a President of Willapa Harbor WBA for 29 years, and a member of the Grays Harbor Bowling Hall of Fame. She was also past president and secretary of Riverdale PTA, and was responsible for the start of the concession stand at the Riverdale baseball fields, which consisted of a tin shack and a sawdust floor. She packed up the inventory and money every night to take home, and then turned around and did it all again the next day. Lila enjoyed playing cards, going to casinos, gardening and delving into family genealogy. She also loved her weekly bowling leagues and bowling tournaments, which she hadnâ€™t done for a few years due to her health. Bowling in Reno at the national bowling championship was a thrill for her â€" every three years she looked forward to that (and a little gambling on the side). In 2005 she and her brother, Roy, also visited their parentsâ€™ homeland in England. Mom was quite the pioneer, often working late into the early morning hours, mopping, canning, etc., while the five of us were sleeping. Having five kids within six years kept our family on the go, and Mom was constantly herding us somewhere as Dad worked mostly nights. Mom got an early start at raising children as, at age 14, she became the caregiver for her younger brother, Roy, as her mother was hospitalized and her Dad worked nights at the Weyco sawmill. Mom also taught herself to drive when we were young, practicing early in the day at the Riverdale ballpark while Dad slept as it was the only time she could use their only vehicle. Mom loved spending time as a kid with her Clapson uncles on the Clapson homesteaded farm in Smith Creek. When her Grandpa Clapson lived at the nursing home, Mom would regularly take him out for a drive and to the Chester Tavern for a drink. Mom talked about learning everything about raising children, to canning, farming and gardening to provide for her family, from her mother-in-law, Thelma Haerling Petit, and Thelmaâ€™s mother, Mary Kitchel Record. A celebration of Lilaâ€™s life will be at 12:00 p.m. Sunday April 6th, 2014 at the Raymond Elks Club. In lieu of flowers that are soon forgotten, Lila requested that a bush or tree be planted in her honor. Memorials may be made to the Willapa Harbor Little League, Willapa Harbor Softball Association, or the Pacific County Museum. Arrangements are in care of Stollerâ€™s Mortuary in Raymond.

Lila Mae (Paul) Haerling, a lifetime Raymond resident, died Thursday, January 9, 2014, at the Willapa Harbor Hospital in South Bend - she was 80. She was born May 17, 1933, in Raymond to Andrew Vincent and Cora Elizabeth (Clapson) Paul. Lila... View Obituary & Service Information

The family of Lila Haerling created this Life Tributes page to make it easy to share your memories.

Send flowers to the Haerling family.