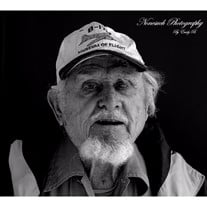 Leland â€˜Budâ€™ Ernest Burns, age 94, passed away Friday, August 12th at the Alder House in South Bend. He died peacefully, on a beautiful sunny day, in the loving presence of his family. He leaves his son, Gary; daughter-in-law, Penny; brother-in-law, Donny; sister-in-law, Janet; grandchildren, Tracey, Emily, Jonathan, Matthew and Sheila; and great-grandchildren, Banks, Lalo, Alyssa, Morgan, Stine, Kimber, Ashley, Kale, Sariah, Nora, Johannes, and Victor, as well as the caring staff of the Alder House who he came to love as well. Born January 31st 1922, in Monarch, Wyoming, Bud lived most of his childhood with his mother, Dolly, and brother, Wayne, in rural Texas. It was a simple way of life for a young man, riding a horse to school everyday. He often recalled that while living on a small border town, he and his brother were the only Caucasian kids at the schoolhouse. He had a great fondness for the Mexican people and their culture, as they warmly embraced Bud and his family as their own. During the outbreak of World War 2, Bud was working as an aircraft builder for the U.S. Navy in California. At the time, he was exempt from the draft because of his service as a factory worker for the military, but as Hitler continued to overtake Europe, Bud made the brave decision to quit his job at the factory so that he could be drafted. His brother, who had already joined the Air Force, died in a tragic Jeep accident in California on April 20th, 1944. Despite the â€˜sole surviving sonâ€™ law, Bud felt it was his duty to fight for freedom, and soon, he was stationed in England, working as a gunner on a B-17 bomber for the U.S. Air Force. After the war, he returned to California, where he met the love of his life, Virgilia Lucille Gutbrod. The two were wed in Las Vegas, Nevada, and later returned to Lancaster, California, where their son Gary was born on May 26th, 1948. The family later moved to Kalispell, Montana, where Gary spent the majority of his youth. Bud worked for the U.S. Postal Service for 32 years, until he retired in 1977. Following the death of his wife in 1997, Bud moved to South Bend, Washington, to live near his son and his sonâ€™s family. There, he grew very close with his granddaughters, Emily and Tracey, who would often walk to grandpaâ€™s apartment after school. He absolutely adored Emilyâ€™s two sons, Lalo and Banks, ages 11 and 2. In 2015, Bud moved into the Alder House, after his poor eyesight compromised his ability to live independently. Leland â€˜Budâ€™ Burns was a man of incredible insight, with an impeccable memory, a sharp mind, and a fantastic (and often naughty) sense of humor. He enjoyed music, and loved to hear his son play the guitar. He had a tender place in his heart for dogs and horses, and babies seemed to fall in love with him immediately. Bud had a severe sweet tooth, and a great appetite for home-cooked food. He claimed that, if good health would allow it, he would have eaten nothing but refried beans forever (followed by some kind of dessert, of course). He will be deeply missed by all who came to know him, and future generations will continue to hear all about the â€œtotal characterâ€ , the wise, the hilarious, the caring man that was Leland Burns.

The family of Leland Burns created this Life Tributes page to make it easy to share your memories.

Send flowers to the Burns family.