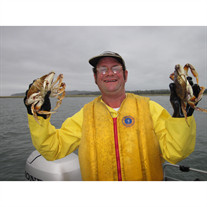 "Lawrence â€œLarryâ€ Dale Sinclair, a lifelong Raymond resident, passed away October 27, 2016 at the Willapa Harbor Hospital in South Bend, Washington; he was 54. Larry was born August 9, 1962 in South Bend, WA to Bentley J Sinclair and Ruby E Sinclair (Cox). Larry graduated from Raymond High School and also attended classes at South Bend High School. He was a proud member of The Raymond Elks Lodge #1292, The Raymond Eagles and was a past president of The Willapa Harbor Lions Club. He was member of The Willapa Harbor Jaycees and was an honorary member of their 1982 Guinness Book of World Records softball marathon team. Larry was also a charter member of The Willapa Harbor chapter of The B.O.B.D. Larry was extremely civic minded and it was not uncommon for Larry to volunteer his time to the aforementioned organizations helping to maintain several parks, selling nuts or dressing up as the Lions Club lion for the annual South Bend Labor day parade. Larry was a self-employed handy man and jack of all trades. He gained a reputation in Willapa Harbor as a dependable, hardworking and accomplished landscaper. Larry had the strength of 10 men and if you needed something heavy moved, you called Larry. He enjoyed rock n roll music, taking his dog Knox for daily walks, riding his bicycle, tinkering with power equipment and visiting with his many friends. Larryâ€™s smile and laugh would light up the room and his hug would take your breath away. He is preceded in death by his father, mother and brother Terry Sinclair. He is survived by his brother Kenny J Sinclair, his nieces Julie and Laura Sinclair and nephew Kenny Sinclair. There is a saying, \\\It takes a village to raise a child.\\\"" That saying was never more true than with Larry and the \\\""village\\\"" of Willapa Harbor. He touched a lot of people over the years and each of those people are better off for having known him. He will be missed." A graveside service was held at the Fern Hill Cemetery in Menlo on November 12, 2016 at 10:30 a.m. A gathering at the Elks will follow. In lieu of flowers donations to help with funeral expenses and a scholarship fund that will be set up in Larryâ€™s honor by the Willapa Harbor Lions Club can be made to: Friends of Larry Sinclair: Raymond Federal Bank P.O. Box 271 Raymond, WA 98577.

The family of Lawrence Sinclair created this Life Tributes page to make it easy to share your memories.

Send flowers to the Sinclair family.