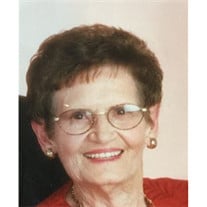 On the evening on November 27th, Katherine Esther Jones passed away peacefully, surrounded by family, in Centralia, WA at the age of 93. Katherine was born in Hillsboro, Oregon on August 1st, 1922 to parents Harry Hilts and Bessie Conway. She grew up in Cheyenne, Oklahoma and it was there that she met the love of her life, James W. Jones. They married in 1940 in Dill City, Oklahoma, then moved to Raymond, Washington where they spent the next 66 years happily married. Anybody with the good fortune to meet Katherine found out what an amazing cook she was. This lifelong passion for cooking began in Raymond, where she first worked at a Greek restaurant, the Raymond School District, and Bridges Inn. Katherine spent her life helping others. She was an active member of the Baptist Church and her door was always open. Anybody that came to visit was greeted with a warm smile and the same question, â€œWhat can I get you to eat?â€ Katherine was known to have a freezer full of apple pies, just in case somebody stopped by. She was happiest when surrounded by family and friends and her unconditional generosity touched the lives of everybody she met. Katherine loved family traditions. One of her favorite traditions, treating her family and friends to biscuits and gravy, lives on to this day as it is commonly requested by all of her grandchildren and great-grandchildren! Katherine is preceded in death by her husband, Jim (JW) in February 2007, father, Harry, mother, Bessie, and brother, Bob Hilts. Katherine is survived by daughter and son-in-law, Judy and Ray Gundersen, son, Ron Jones, sister, Joyce Shelton, four grandsons, Erric Jones, Adam Jones, Jeff Gundersen, Brian Gundersen, six great-grandchildren, and numerous cousins, other relatives, and close friends. A funeral service is planned for 11:00 a.m. on Wednesday, December 2nd at the Baptist Church in South Bend, with a graveside serviced to follow. Donations can be made to the Alzheimerâ€™s Association at www.alz.org/join_the_cause_donate.asp or Alzheimerâ€™s Association, PO Box 96011, Washington DC, 20090-6011.

On the evening on November 27th, Katherine Esther Jones passed away peacefully, surrounded by family, in Centralia, WA at the age of 93. Katherine was born in Hillsboro, Oregon on August 1st, 1922 to parents Harry Hilts and Bessie Conway.... View Obituary & Service Information

The family of Katherine Jones created this Life Tributes page to make it easy to share your memories.

On the evening on November 27th, Katherine Esther Jones passed...