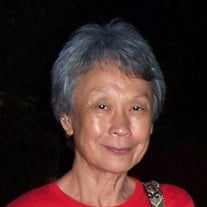 June (Ee) “Poh Lian” Priest June passed away quietly at home in Nalpee, Willapa Valley on August 12, 2019 after a rapid decline in her health. June was born June 5, 1941 to Ee Ghim Seng and Lau Qui Siaw — in Kuching City, Sarawak State, Malaysia. She grew up in Kuching and graduated from Batu Lintang Teacher’s College in 1960. She taught elementary school for several years. In 1962, June met Guy while he was serving in the US Peace Corps and they continued communicating for a few years until she came to the US and married Guy on August 13, 1967 in Tacoma, Washington. June and Guy lived in Tacoma, Washington from 1967 to 1970. They lived in Taipei, Taiwan from 1970-1975 where Guy taught at Taipei American School. In 1975, they moved back to the family farm in Nalpee where June has lived since. June grew up in the Anglican Church in Malaysia and sang in the choir for many years. She loved athletics and was a high-jumper, softball pitcher and threw javelin. In the US, she was an active member of St. John’s Episcopal Church, then Lebam Wesleyan Church and then New Beginnings Wesleyan Church where she always enjoyed the music and teaching. She loved the Lord Jesus and shared Him with family and friends whenever she could. She also enjoyed square dancing in several square dance clubs since 1967. She was a caring wife and mother - mixing her wise words with sharp and humorous wit. She was the friend of many and, as one friend said, “You couldn’t out-give June.” June is survived by her husband Guy Priest at the family home, her four brothers (Ee Huay Teck, Ee Poh Teck, Ee Eng Teck, and Ee Tsiu Teck) and their families , her two sons Gerald and Greg and their families, “Aunt” Shirley Hettiger, and numerous cousins, nieces and nephews. A Celebration of Life service will be held on August 24, 2019 at the Lebam Community Church at 11a.m. At June’s written request, “please go easy on flowers and such. No need, really, really, really! I’ll be in a place that has more beautiful flowers than any on this earth. :-) Thank you for being my family and friends while I was here. You are much loved and appreciated. For those who still don’t know my Lord Jesus Christ, I pray that you will accept Him soon, soon, soon; then we can be together again . . . For those who feel that they must give something (no need, really) please donate to the Union Gospel Mission in Aberdeen.

The family of June P Priest created this Life Tributes page to make it easy to share your memories.

June passed away quietly at home...

Send flowers to the Priest family.