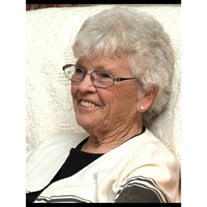 "Joy Lee (Littlejohn) Bredeson entered into eternal peace on Friday, March 2nd, 2018 at her home in Adna, Washington. Born in Glasston, ND on August 18th, 1930 to Hughie and Lellamae Littlejohn she started life with humble beginnings. The Great Depression hit hard- yet it wasn\\'t until later in life that she realized just how poor they were and how that hardscrabble childhood had formed the adult she had become. Joy was known as a \\\ Pioneer Woman\\\"" by those that knew her. She accepted life on life\\'s terms and did what needed to be done no matter the circumstances. " She was raised in the Red River Valley area of North Dakota and spent her early childhood days in the potato fields with her parents, where they worked making $.50 a day. When she was old enough to attend school she rode her horse there and back. Like many men of that area, her father left for one of the wartime jobs created in Seattle in the early 40\\'s. Her mother followed the trail west in 1943, moving Joy and her sister by train to Seattle. They joined their father after he had been there a few months and secured a job. Joy got a job herself at age 15 but had to quit due to new child labor laws until she was 16. When she graduated from Franklin High School in 1948 she was given a gift of a trip back to North Dakota and Minnesota to visit friends and family. It was on this trip that she met the man she would soon marry and spend 63 happy years with- Gordon Bredeson. Joy and Gordon lived in several places during their marriage and never tired of traveling. They made new friends along the way, and never failed to find a place to dance. They were wonderful partners that worked tirelessly together. Whether it was on the dairy farm they owned, one of the many houses they bought and sold, or planning their next trip and adventure, they worked as a team. The two of them enjoyed traveling all 50 states and Europe by several different means, but she enjoyed camping in the various RV\\'s they owned the best. She claimed that there was no better nights rest than sleeping in her RV. One of the most important aspects of life to Joy was spending time with family. It was of utmost importance that family reunions and functions were well attended, that way her children would know their extended relations and family roots. She attended family reunions in Minnesota well into her eighth decade of life, driving there annually. She also attended as many of her grandchildren and great-grandchildren\\'s events as possible. After Gordon passed in 2011 she spent many happy hours visiting with friends at the Twin Cities Senior Center and trying her luck on the penny slot machines in the Casino. She enjoyed watching the Mariners, feeding birds and gardening but her pets Grover, Bailey and Socks were her joy. Joy was preceded in death by her parents, husband, and two sons (Devin-1969, Dwight-1974) and an infant brother. She is survived by her daughters: Kyla (Duane) Heintz and Kathy (John) Ashley, and grandchildren Eric Jones, Erin Jones-Barnhardt, Ryan Ashley, Stephanie Maffeo and 12 great-grandchildren. She is also survived by her sister Barythe (Peggy) Topping and special aunt, Elsie Lislegard. Funeral services will be held Saturday, March 10, 2018 with viewing from 10:00-11:00 a.m. at Stollerâ€™s Mortuary, 315 5th Street in Raymond, followed by a Graveside Service at 11:30 a.m. for any who want to attend at the Fern Hill Cemetery in Menlo. A Celebration of Joyâ€™s Life will be held at 1:00 p.m. that afternoon at the Willapa Methodist Church, 969 Willapa 1st Street, Raymond, WA a luncheon will follow. Memorials may be sent to Lewis County Seniors, 2524 N. National Ave., Chehalis, WA 98532 or the charity of your choice.

The family of Joy Bredeson created this Life Tributes page to make it easy to share your memories.

Send flowers to the Bredeson family.