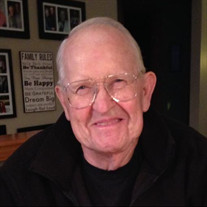 Joseph A. Weiberg Joseph Alfred Weiberg, 91, passed away November 22, 2021 surrounded by his loving family at the Virginia Mason Medical Center in Seattle. Joe was born June 19, 1930 in South Bend, Washington to Joseph and Josephine Weiberg. He graduated from South Bend High School in 1947 and served in the United States Army from 1953 to 1955. Upon his return he married the love of his life, Beverly Jean Frazier of Raymond, at the Immaculate Conception Church on June 18, 1955. They were married 53 years. Joe operated the Alta Vista Dairy with his parents and his brother Louie in downtown South Bend until its closing in 1972, after which he lent his carpentry skills to an expansion project at the Willapa Harbor Hospital Campus in South Bend. In 1973, he began a second career with the Postal Service where he worked for 23 years with perfect attendance, retiring in 1996. He worked at the Raymond Post Office for the majority of his career, where he greatly enjoyed interacting with customers as a clerk. Joe was also a volunteer fire fighter at the South Bend Fire Department for many years. Joe was an engaged citizen of the South Bend community. He and his friends closely followed the South Bend Indians athletics for many years, earning a designated place to sit in the home gym. He was also an active member in the American Legion. Additionally, Joe was an avid golfer throughout his life. He and his brother Louie each recorded five hole-in-ones, his last in 2009 on the seventeenth hole at the Willapa Harbor Golf Course in Raymond. He was 79 years old. Joe also took great pride and pleasure in his gardening, but always prioritized spending time with his friends and family ahead of all else. He had a soft spot for animals and was especially adored by his “granddogs” Sophie and Cielo. Joe is survived by his sister Mary (Cal) Taylor of Puyallup; his daughter Diane Brock of Tacoma; his two sons Greg Weiberg of South Bend and Jim (Michelle) Weiberg of Aberdeen; and his beloved grandchildren Jason Sexton, Jordan (Amelia), Josie, and Kylie Weiberg. Joe was preceded in death by his sweet Beverly, his parents, his older brother Louie, Greg’s life partner Charlotte, and son-in-law Terry Brock. He also had two brothers, Ludwig and George, who perished tragically in 1928. We all miss you dearly Grandpa Joe! A public graveside service will be held at the Fern Hill Cemetery in Menlo, WA on Friday, December 10, at 1:00pm. A reception may be scheduled at a later date. In memory of Joe, the family asks that donations be made to your favorite charity or the Willapa Harbor Helping Hands in South Bend. Arrangements are in care of Stoller’s Mortuary in Raymond, Washington. You may visit www.StollersMortuary.com to leave condolences for the family.

The family of Joseph A Weiberg created this Life Tributes page to make it easy to share your memories.

Send flowers to the Weiberg family.