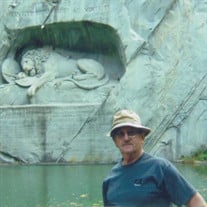 Joe Kaech Jr., age 80, died on Monday, September 21, 2020 at home in Frances. Throughout his life, Joe was a learner, teacher, traveler, friend, and lover of nature. Joe was preceded in death by his parents Joe and Lena Kaech. Joe was born on Sept. 8 , 1940 in Frances, WA. He grew up on the family farm there, attended Lebam Elementary School and graduated from Willapa Valley High School in 1958. He went on to college earning a B.A. and teaching credentials from Central Washington University in 1964. He began his teaching career with the Raymond School District as a fifth grade instructor at Ninth Street Elementary and later as head teacher at Riverview Elementary. 1968 Joe hired on with the Dept. of Defense School system, teaching in the Philippine Islands, Germany, and England. Retuning to Washington in 1971 he continued his teaching career with the Central Kitsap School District at Silverdale, WA. Joe retired from full time teaching in 1995 and then continued for the next 14 years as a substitute teacher for CKSD. During his long teaching career Joe received a number of teaching awards. Among them was being selected as CKSD's teacher of the year, nominated for the National PTA Outstanding Teachers award and was listed in Who's Who Among American Teachers. He also received many letters from former students, principles, and school superintendents for his efforts in the classroom. Joe took an active part in the local Education Association. He held several leadership positions, was a member of contract negation team and attended many State and National conferences. He was awarded his local associations (CKEA) service award in recognition of his efforts tomake improvements in the classroom for students and teachers. Joe recognized the value of a post high school education, so he established a scholarship to be awarded annually to a graduating senior from Willapa Valley High School. In 2011 Joe moved to the family farm in Frances and along with his brother and sister established and maintained a tree farm. He worked with nature to make sure the tree farm was a success. Joe enjoyed photography, reading, gardening, cutting firewood, exploring nature, and traveling. His interest to learn more about the world around him led Joe to visit over 60 countries and a majority of the fifty states.   Joe was a long time member of the Washington Education Association and the National Education Association. Being proud of his Swiss heritage, Joe was an active member of the Lewis Pacific Swiss Society.   Joe is survived by his sister Patti Gwerder, brother Dennis Kaech, special friend Darlene Sral, and many nieces, nephews, and friends. In lieu of flowers, because of his dedication to education, memorials may be sent to the Kaech ’58 Scholarship Fund or the Lewis Pacific Swiss Society Scholarship Fund, both in care of, Patti Gwerder,  331 Elk Prairie Road,  Raymond, WA  98577 A memorial will be held at a later date.

Joe Kaech Jr., age 80, died on Monday, September 21, 2020 at home in Frances. Throughout his life, Joe was a learner, teacher, traveler, friend, and lover of nature. Joe was preceded in death by his parents Joe and Lena Kaech. Joe was born... View Obituary & Service Information

The family of Joe Jacob Kaech Jr. created this Life Tributes page to make it easy to share your memories.

Send flowers to the Kaech family.