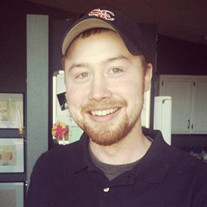 Jeremy Andrew Mullen was born to Bill Mullen and Cindy (Couch) Konigsberger on September 2, 1985 in South Bend, Washington and passed away December 27, 2013 at his home in Gresham, Oregon. Jeremy grew up in Raymond. He attended South Bend Elementary and Willapa Valley Jr. High and High School where he graduated in 2004. He then moved to the Spokane area where he attended Eastern Washington University and was recently taking classes at Mount Hood Community College in hopes of attaining a degree in engineering. During his years as a student Jeremy held many jobs from cooking in restaurants to climbing cell towers but his favorite job was when he was hired as a fly fishing guide in Alaska. From the time he was a young boy fishing was his hobby and throughout his life this remained one of his passions. If he wasnâ€™t fishing he was playing the guitar or drums with his friends as music had also been one of his greatest joys. Jeremy is survived by his father, Bill Mullen, his mother, Cindy Konigsberger and two grandmothers, Ethel Mullen and Dorene Couch. Jeremy also had three brothers, Brian Konigsberger, Rob Mullen and Matt Konigsberger, two sisters, Mindi Rumbles and Stevi Konigsberger, nieces and nephews Chloe, Peyton and Steve Konigsberger, Elijah and Jonah Rumbles, and Olivia Mullen as well as many aunts, uncles and cousins. He was preceded in death by his grandfathers, W.H. Mullen and Loren Couch, his uncle, David Mullen and his stepfather, Steve Konigsberger. The family is requesting that donations be made to the Willapa Valley Alumni Scholarship in memory of Jeremy Mullen and can be mailed to P.O. Box 128, Menlo, WA. 98561.

Jeremy Andrew Mullen was born to Bill Mullen and Cindy (Couch) Konigsberger on September 2, 1985 in South Bend, Washington and passed away December 27, 2013 at his home in Gresham, Oregon. Jeremy grew up in Raymond. He attended South Bend Elementary... View Obituary & Service Information

The family of Jeremy Mullen created this Life Tributes page to make it easy to share your memories.

Send flowers to the Mullen family.