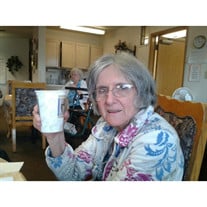 Janice P. Wilson, a longtime Raymond resident, died Wednesday, September 18, 2013 at the Roo Lan Health Care Center in Lacey; she was 74. Janice was born February 12, 1939 in Pound, Virginia, to Alfred and Lester (Collins) Boggs. She graduated from Pound High School in 1957. After moving to the Harbor she worked as a clerk and a janitor before finally becoming a receptionist for the Willapa Harbor Herald until her retirement in 1998. Janice married David Wampler in 1960; together they had three daughters, and they later divorced. She married the love of her life, Freddie Wilson in April of 1974. Freddie brought two sons and a daughter to the family and together they had a son. They raised all seven children in Raymond. Freddie preceded her in death March 2, 1996. Janice was a member of the Raymond Eagles, the Red Hat Society, Crossroads Church in Raymond and volunteered for the Host reading program at Raymond Elementary School. She enjoyed gardening, walking, traveling, Lifetime Movies, cooking for family and crocheting. Janice is survived by three sons, Dennis (Kelly) Wilson of Bellevue, WA, Roger Wilson of Port Angeles, WA and Gary Wilson of San Francisco, CA; four daughters, Denise (Doug) Phillips of Elko, Nevada, Susan Holt (Bryan Jackson) of Olympia, WA, Marcia (Sean) Brandel of Bothell, WA and Patty (Graciano) Rubio of Keizer, OR. She is also survived by a brother Carson (Shirley) Boggs of Raymond; sisters Violet (Mel) Corbit of South Bend, Mary Jane (Robert) Sturgill of New Bern, North Carolina, a sister-in-law Joyce (John) Gerow of South Bend, WA and her â€œsister in spiritâ€ Rosa (Paul) Wampler of Raymond; 14 grandchildren and 5 great grandchildren, many nieces, nephews and cousins and special niece Cathy (Curt) Whited of Raymond also survive Janice. She was preceded in death by brothers Burt, Odell, Wilburn, Elmo, Elbert, Calvin, Charles and Donald; a sister Geneva and a granddaughter Elena Rubio. Memorials in Janiceâ€™s memory may be made to the Alzheimerâ€™s Association, PO Box 96011, Washington, D.C. 20090. Funeral services will be held at 1:00 p.m. Monday, September 23, 2013 at the Crossroads Church in Raymond. Arrangements are in care of Stollerâ€™s Mortuary in Raymond.

The family of Janice Wilson created this Life Tributes page to make it easy to share your memories.

Send flowers to the Wilson family.