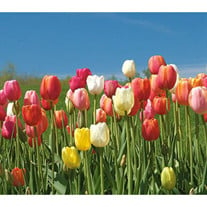 Jane Elizabeth Dick passed away at Mission Healthcare in Bellevue, Washington at the age of 91. She was born in Sheldon, North Dakota on February 1, 1925 to Anthony and Ella Braun McManus. Jane was the sixth of eight children. After high school she moved to the west coast. She resided in the Portland area where she worked as a welder in the shipyards during World War II. Her brief marriage to Norman Mallett produced a son, Gene, in 1947. Jane and Gene moved to Raymond to be close to her parents when her father got a job as a newspaper editor there. Jane met her second husband, Babe Dick, at the Raymond Elks Lodge where she was a bartender. They married in Raymond in 1956, and Babe adopted Gene. They later had a son, Marty in 1967 - a big surprise! Babe and Jane raised their family in Baleville, always with a large garden and a menagerie of family pets. Jane spent those years as a homemaker and grew beautiful flowers. She loved cooking for people, and enjoyed having friends and family over. Jane was a lifelong Catholic; her faith was very important to her. She loyally attended St Lawrence Catholic Church in Raymond where she taught CCD and was a member of the outreach committee and prayer group. After Babeâ€™s death in 1994, Jane moved to the Riverview area of Raymond. She was a proud and loving gramma to her three granddaughters â€" MacKenzie Jean, Rylie Elizabeth and Lexie Ann. Janeâ€™s constant companion was her dog, Cookie. She enjoyed daily walks with Cookie and driving her friends to Aberdeen for doctor appointments and errands. In 2006, Jane moved to Redmond, Washington to be closer to Martyâ€™s family. Throughout the later years, she kept a positive attitude and made friends wherever she went. She is survived by her son Marty Dick, granddaughters Kenzie, Rylie and Lexie Dick, sister Colleen Pittsenbarger, and daughter-in-law Kirsten Gunderson. She was predeceased by her husband Babe, her son Gene, her parents Anthony and Ella, and siblings Mickey, Grace, Dick, Helen, Patricia and Beverly. Everyone is welcome at the funeral on Tuesday, April 12th at 2:00 at St Lawrence Catholic Church in Raymond. In lieu of flowers, donations may be made to the Alzheimerâ€™s Association online at www.alz.org/donate or mailed to Alzheimerâ€™s Association, 100 W Harrison Street Suite N200, Seattle WA 98119. Arrangements are in care of Stollerâ€™s Mortuary in Raymond.

Jane Elizabeth Dick passed away at Mission Healthcare in Bellevue, Washington at the age of 91. She was born in Sheldon, North Dakota on February 1, 1925 to Anthony and Ella Braun McManus. Jane was the sixth of eight children. After high school... View Obituary & Service Information

The family of Jane Dick created this Life Tributes page to make it easy to share your memories.

Jane Elizabeth Dick passed away at Mission Healthcare in Bellevue,...

Send flowers to the Dick family.