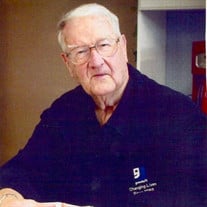 Howard Norman Lee passed away Saturday, February 13, 2021, at the Alder House in South Bend, WA; he was 95. He was born August 5, 1925, to William and Mable (Jennings) Lee in Seattle, Washington. Howard was a member of the V.F.W. and a veteran of World War II serving as a Corpsman 1st Class. He enjoyed woodworking, gardening, and going on long car rides with his kids. Howard left Cleveland High School in Seattle at the age of 17 to join the Navy. He took part in the invasion of Okinawa on April 1, 1945. He received an honorary military veterans diploma from Willapa Valley High School in 2005. After the war, he worked as an appliance repairman for Sears Roebuck in Seattle until 1965. At that point, he was tired of city living and he moved his family to Lebam and later Menlo. He worked as a residential electrician locally for many years. In the mid-1970's he owned and operated the Hilltop Tavern in East Raymond. After retirement, he worked part-time for the Port of Willapa spending hours and hours mowing lawns on Port property. Howard was preceded in death by his wife Jean, both his parents, and his daughter Janet Roberts. He is survived by daughters Nancy Lee of Yelm, Marilyn (Keith) Van Etten of Spanaway, Linda (Bob) Smith of Montesano, Kristi (Pinky) Freeman of Raymond, his son Michael (Amy) Lee of South Bend, son-in-law Pete Roberts of Lewiston, Idaho, 13 grandchildren, and numerous great and great-great-grandchildren. In lieu of flowers, memorials may be made to the Alder House at P.O. Box 1400, South Bend, WA 98586. Arrangements are in care of Stoller's Mortuary in Raymond, Washington. You may visit www.StollersMortuary.com to leave condolences for the family. A private graveside service with honors will be held at a later date.

Howard Norman Lee passed away Saturday, February 13, 2021, at the Alder House in South Bend, WA; he was 95. He was born August 5, 1925, to William and Mable (Jennings) Lee in Seattle, Washington. Howard was a member of the V.F.W. and a veteran... View Obituary & Service Information

The family of Howard Norman Lee created this Life Tributes page to make it easy to share your memories.

Send flowers to the Lee family.