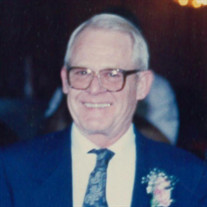 Hilden Nomer Heath also known as Hud Heath, age 90, passed away on March 16, 2021 at home surrounded by his family. He was born on February 8, 1931 in Toledo, WA to Ivan H. And Ida (Ritzman) Heath. Hud graduated from Willapa Valley High School class of 1949. Following graduation he moved to the Seattle area where he worked in sheetmetal construction. Following his retirement he moved back to Menlo where he resided until his death. in addition to his parents he was predeceased by his wife Opal Miles Heath, his brothers Larry Heath and Meme Heath and sister Bonnie Hadler. He is survived by his sons Ivan Heath of Rathdrum, Idaho, Rex Heath of Soap Lake, WA, daughter Laural Yeats of Yuma, AZ, stepsons Kenneth Miles of Idaho Falls, ID, William Miles of Oakville, WA, stepdaughters Cheryl Archibald of Oakley, ID, Lisa Miles of Burien, WA, sister Emma Bauman of Olympia, WA, and sister in law Pat Heath of Raymond, WA. A graveside service will be held on Wednesday, March 24th at 1:00 p.m. at Fern Hill Cemetery in Menlo, WA. In Lieu of flowers donations may be made to Willapa Harbor Helping Hands at P.O. Box 597, South Bend, WA 98577 Arrangements are in care of Stoller's Mortuary in Raymond, Washington. You may visit www.StollersMortuary.com to leave condolences for the family.

The family of Hilden Nomer Heath created this Life Tributes page to make it easy to share your memories.

Send flowers to the Heath family.