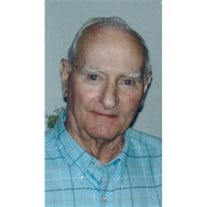 Henry Raphael Orkney, a lifetime Raymond resident died Sunday, September 25, 2016 at his home in Raymond; he was 86. Henry was born September 24, 1930 in Raymond to Henry and Marie A. (Morneau) Orkney. He married Virginia Reeves November 24, 1950 at the Raymond United Methodist Church, she survives him at the home he built in 1972. He spent many years working as an electrician for Weyerhaeuser, retiring in 1991. Henry was a member of the Raymond Elks, Eagles and Willapa Harbor Lions Club. He had a love for football and supported the local Raymond High School team attending many of the games. Henry also enjoyed watching the Seahawks and Huskies. He spent a lot of time outdoors, whether it be tending to his garden, hunting or camping he loved it all. Henry had a lot of friends and was close with his family. He is survived by his wife Virginia Orkney of Raymond, three sons James (Andrea) Orkney of Rochester, John (Lauri) Orkney of Raymond and Thomas (Kari) Orkney of New Hampshire. Henry is also survived by a brother Jack (Wilma) Orkney of South Bend, and two sisters Dedie (Ray) Thompson of Raymond and Betty Jean Keiper of Winlock, four grandchildren Chris, Kari, Brittney and Cody and four great grandchildren Aaron, Joseph, Bailee and Ashley as well as numerous nieces, nephews and cousins. Henry was preceded in death by three sisters, Marcella Williamson, Charlotte Cole and Mary Jane Nichols and a brother Bill Orkney. Funeral services will be held at 11:00 a.m., Monday, October 3, 2016 at Stollerâ€™s Mortuary in Raymond followed by burial services at Fern Hill Cemetery in Menlo. Arrangements are in care of Stollerâ€™s Mortuary in Raymond.

Henry Raphael Orkney, a lifetime Raymond resident died Sunday, September 25, 2016 at his home in Raymond; he was 86. Henry was born September 24, 1930 in Raymond to Henry and Marie A. (Morneau) Orkney. He married Virginia Reeves November 24,... View Obituary & Service Information

The family of Henry Orkney created this Life Tributes page to make it easy to share your memories.

Send flowers to the Orkney family.