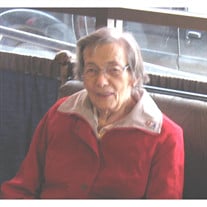 Helen (Gurr) Wolfenbarger passed away on August 18, 2013 at the age of 87. She was born February 6, 1926 in Raymond to Vernal William Gurr and Phebe (Arnold) Gurr. She was married to Joseph David Wolfenbarger for 68 years, who preceded her in death May 13, 2013. She was also preceded in death by her parents, her brother James Gurr, and her great grandson, Sean Shipley. Helen graduated from Raymond High School in 1944 and attended the College of Puget South (UPS) in Tacoma. Helen was active in PTA, Brownie Scouts, Cub Scouts, Garden Club, March of Dimes, TOPS, Pacific Lioness, and the United Church of Raymond. She and her husband, Dave, were avid supporters of the Habitat for Humanity Program for many years. She loved sewing and baking and especially liked making her hundreds of aprons over the years. During her husbandâ€™s term as Pacific County Commissioner, she baked hundreds of dozens of cookies to take to all of the Pacific County Offices during the holidays, and continued this practice for several years after Daveâ€™s term. Helen is survived by her brother, Eugene Gurr of Raymond; her three children, William Joseph Wolfenbarger of Aberdeen, Cara (Keith) Shipley of Olympia, and Phebe (Dennis) Porter of Raymond; her seven grandchildren, JoDeana (Rick) Jones, Deborah (Clint) Wolfenbarger-Jones, Sharyn Wolfenbarger, David (Mitzi) Shipley, Neil (Delphine) Porter, Ryan (Donna) Porter, and Denise (William â€œBillâ€ ) Rowlett; her nine Great grandchildren, R.J. (Megan) Power, Jaqui (Ryan) Quam, Brittany Jones, Steven Shipley, Harrison Porter, Scarlett Porter, Alyssa Rowlett, Jessica Rowlett, and Tristan Lund; her five great great grandchildren, Brayden, David and Nathan Power, Reilly Power and Damien Quam; and numerous nieces and nephews. A Memorial Service will be held at 1:00 p.m. at the United Church of Raymond on Saturday, August 24, 2013. Memorials may be made to the Raymond Theater Roof Project at 323 3rd Street, Raymond, WA 98577.

Helen (Gurr) Wolfenbarger passed away on August 18, 2013 at the age of 87. She was born February 6, 1926 in Raymond to Vernal William Gurr and Phebe (Arnold) Gurr. She was married to Joseph David Wolfenbarger for 68 years, who preceded her in... View Obituary & Service Information

The family of Helen Wolfenbarger created this Life Tributes page to make it easy to share your memories.

Send flowers to the Wolfenbarger family.