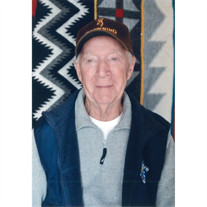 Glen Wayne Richey, a long-time resident of Pacific County, passed away November 13, 2016 at his home in Tokeland, WA after a brief battle with cancer. He was 85 years young. Glen was born August 14, 1931 in Bellingham, Washington to Betty (Duncan) and Dallas Lorenzo Smith. He was adopted in 1936 by his aunt and uncle, Gladys (Duncan) and Daniel R. Richey. He was raised in South Bend, WA and graduated from South Bend High School in 1949. Glen and his first wife, Phyllis (Scalf) had two sons, Daniel and Mike. Glen later married Barbara (O\\'Shaughnessy) and they had one daughter, Karin. In 1975, he and Carol (Mason St. Clair) were married. They lived in South Bend until Glen\\'s retirement, after which they moved to Alberton, Montana. Glen retired after 47 years with the Weyerhauser Company. He worked in the Raymond Sawmill for more than half of his career and transferred to the Aberdeen Mill where he continued to work until his retirement. In Glen\\'s early days he enjoyed competitively racing motorcycles throughout Washington, earning many trophies along the way. His love for motorcycles never quite faded as later in life he was often out cruising the neighborhood on his moped. Glen was an avid outdoorsman who loved hunting, fishing, boating, and photographing wildlife. Quite the talented craftsman, he and Carol created many projects together throughout the years. Glen moved back to Washington shortly after Carol\\'s death in 2012, settling in Tokeland. He quickly became a beloved member of his Dexter by the Sea community, where he leaves behind many cherished friends. Glen was loved and will be missed by his family and friends alike. He is survived by sons, Dan (Gloria) of Aberdeen, WA and Mike (Shelly) of Raymond, WA; daughter Karin (Chuck) Kohls of Naches, WA; stepchildren Oliver (Susan) St. Clair of Alberton, MT; Virginia (Mike) Janisse of Eugene, OR; Cindy St. Clair of Eugene, OR; Robin (Mike) Birkland of Bremerton, WA; Daulton Moss of Bethel, AR; and Dale Moss. Glen was blessed with 23 grandchildren, 23 great-grandchildren, and 3 great great-grandchildren. A Celebration of Life will be held at the Raymond Elks Lodge on Friday, December 2, 2016 at 12:00 pm.

Glen Wayne Richey, a long-time resident of Pacific County, passed away November 13, 2016 at his home in Tokeland, WA after a brief battle with cancer. He was 85 years young. Glen was born August 14, 1931 in Bellingham, Washington to Betty... View Obituary & Service Information

The family of Glen Richey created this Life Tributes page to make it easy to share your memories.

Send flowers to the Richey family.