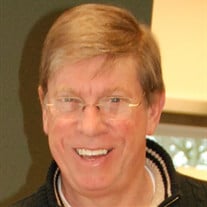 George G McNelly George McNelly was called home to heaven Saturday, February 20, 2021. He was born in Olympia, WA, on January 3, 1943, to George R. and Virginia (Berdine) McNelly. He had five siblings - Denis McNelly, Joel (Cathleen) McNelly, Howie (Annie) McNelly, Kathleen (John) Taylor, and Eileen McNelly and numerous nieces, nephews, great-nieces and nephews that he loved to spend time with. George, aka Buzz, had great memories of growing up in Winlock, WA. He told stories of earning money for extras by picking strawberries, peeling bark, harvesting timber cone for seed, collecting scrap metal, mowing lawns, etc. He said his parents taught them to earn their “own stuff”. After graduation, he attended St Martin’s College while working part-time. George enjoyed a long banking career and retired in 2009. He spent many hours during his retirement working on his tree farms, restoring a vintage motorcycle, visiting and reminiscing with friends, cutting wood, and faithfully watching Jeopardy. Although George and Anne (Fosse) celebrated their 40th anniversary at home due to COVID, not all anniversaries were so uneventful. One of George’s fondest memories was their 25th anniversary trip to New Brunswick where he was able to explore his familial roots. They were blessed with two daughters, Megan and Leigh. George’s eyes always lit up talking about his girls and he always made sure his family was taken care of first…every time. A graveside service will be Saturday, March 6th, 2021 at 1 PM at Fern Hill Cemetery in Menlo, WA.

The family of George G McNelly created this Life Tributes page to make it easy to share your memories.

Send flowers to the McNelly family.